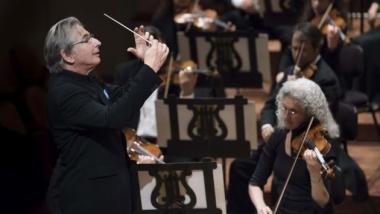 Michael Tilson Thomas is about to embark on his penultimate season as music director of the San Francisco Symphony. He announced last year that he will retire from the position at the end of the 2019-2020 season — becoming music director laureate — for reasons he told to The New York Times:

It will be my 75th year when this happens, and will also be my 25th year as music director of the San Francisco Symphony. Almost my entire adult life I’ve been the music director of some organization or another.

I have volumes and volumes of almost-completed compositions and stories and poems and collections and all sorts of things. For years I’ve been thinking that if I’m going to be able to devote time to making sure that these things are in good shape before I’m outta here, this would be a kind of good moment to think about doing that.”

During MTT’s years as music director — one of longest tenures currently among the world’s major orchestras, along with Zubin Mehta and Iván Fischer — S.F. Symphony has showcased the music of American composers, won 15 Grammy awards (seven for its Mahler cycle), and created Keeping Score, a PBS series and multiplatform project that has made the music of Beethoven, Ives, Mahler, and other masters more accessible to all.

Beyond 2020, MTT plans to continue as artistic director of Miami’s New World Symphony, which he founded in 1987 with the late Ted Arison, of Carnival Cruise Lines.

In addition to guest-conducting appearances, MTT’s 2018-19 San Francisco season will center on a Stravinsky Festival and major events at the beginning and conclusion of the season.

Stravinsky, who mentored the young MTT in Los Angeles, has always been a composer of special interest to the conductor, as demonstrated by numerous performances and many recordings. The S.F. Symphony Stravinsky festival will feature Perséphone and The Firebird Sept. 21-23; Petrushka, the Violin Concerto, and The Rite of Spring, Sept. 27-30.

(Valery Gergiev and the Mariinsky Orchestra will join the Stravinsky celebration in Davies Hall on Oct. 21, with Symphony in Three Movements, Capriccio for Piano and Orchestra, Symphony in C, and The Firebird Suite.)

Season highlights with MTT include the Sept. 5 opening gala when he conducts a varied program of mostly short pieces of film music by Carlos Gardel, John Barry, John Williams, and Ennio Morricone; made more substantial with a Bach concerto and Gershwin’s An American in Paris.

MTT, who is in charge of the Carnegie Hall Perspectives series, leads four orchestras over seven concerts in New York, including the San Francisco Symphony on Oct. 3 and 4, the second being an all-Stravinsky program. The orchestra than repeats the Stravinsky concert on Oct. 5 in the Tilles Center for the Performing Arts of Greenvale, NY.

Nov. 15-18 will see MTT in Davies Hall both as conductor (of Beethoven’s Symphony No. 3) and composer (of From the Diary of Anne Frank). The Beethoven No. 9 will share the program with Berg’s Seven Early Songs, Nov. 23-25.

No sign of retirement anywhere in sight as MTT divides his time between San Francisco, Miami’s New World Symphony, guest engagements, and the celebration of the Leonard Bernstein centennial around the world.

The eccentric and enormous work was lucid in the orchestra’s hands.