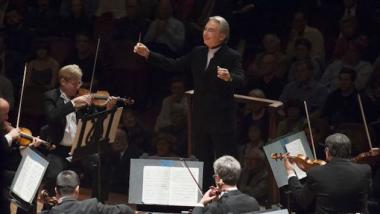 When Michael Tilson Thomas, 73, announced that he will step down as music director of the San Francisco Symphony following the 2019–2020 season, his 25th here, one might have thought of retirement. One would be wrong — especially when considering the thriving career of MTT’s predecessor, Herbert Blomstedt, who will turn 91 on July 11.

MTT has been leading both SFS and Miami’s New World Symphony and is also busy guest conducting around the world and composing his own works. On top of all that, he is deeply engaged with the the fostering of young talent through education and training.

His founding and continued active leadership of the New World Symphony, a remarkable “orchestral academy” that has produced hundreds of outstanding artists over the past 30 years, is only the most visible part of MTT’s involvement in raising the next generation of musicians.

This summer, MTT continues both his conducting and teaching careers, leading SFS, the Boston Symphony at Tanglewood, the MET Orchestra at Carnegie Hall, and heading three major educational partnerships:

Carnegie Hall’s NYO-USA comprises young orchestral musicians (ages 16–19) from across the country. MTT will first work with the orchestra in Purchase, New York, where the musicians spend three weeks engaged in rehearsals, workshops, and recreational activities.

He then conducts NYO-USA in Carnegie Hall on July 19, and subsequently leads the orchestra on a five-city Asian tour, performing Sibelius’s Symphony No. 2, Gershwin’s Piano Concerto in F Major featuring Jean-Yves Thibaudet, and the world premiere of Ted Hearne’s Brass Tacks, a Carnegie Hall commission.

Next year, MTT will conduct the New World Symphony at Carnegie Hall during the 2018–2019 season as part of the Perspectives series — May 1 in Stern Auditorium and May 2 in Zankel Hall.

MTT will be in residence in Santa Barbara each summer as Signature Festival Conductor of the partnership, joined by principal players from each section of the LSO. Together, they will teach and mentor Academy Fellows — young instrumentalists (ages 18–34) from around the world and of all backgrounds who attend the Academy on full scholarships.

Twelve of the 95 Fellows will then be selected via audition to travel to London the following winter for 10 days of intensive training with the LSO and Simon Rattle.

Locally, MTT returns to Davies Hall next month for symphony, concerto, and opera performances with the orchestra. He conducts Mussorgsky’s Boris Godunov in a production staged by James Darrah on June 14, 15, and 17. Back-to-back Sibelius symphonies — Nos. 6 and 7 — are featured on the June 21–24 program, which also includes Rachmaninoff’s Piano Concerto No. 3 with Daniil Trifonov.

Mahler’s Symphony No. 3, featuring mezzo-soprano Sasha Cooke, is conducted by MTT on June 28, 29, and 30, concluding the SFS season.