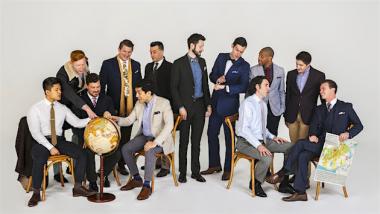 Musical Chairs for Leadership at Chanticleer and New Century

There’ll be some changes made for Philip Wilder, Christine Bullin, Chanticleer, New Century Chamber Orchestra, and you, and me ...

To sort it all out, even as the news is coming from all around:

* Philip Wilder is leaving NCCO after serving six years as executive director.
* Chanticleer President and General Director Christine Bullin is retiring after 20 years in office.
* Wilder is named to succeed Bullin in the fall; to fill his position, NCCO will form a search committee.

Not being coy about what he may regard as his advanced (ha!) age, the ever-youthful Wilder says:

I was 21 years old when Chanticleer’s founder Louis Botto and Music Director Joseph Jennings hired me to sing countertenor in the ensemble. I can hardly describe the sense of excitement and pride I felt to have the opportunity to move to San Francisco to sing full-time for a living.

Now 30 years later, I feel the same as I did then as I return home to Chanticleer to support these extraordinary musicians in the role of president and general director.”

And, looking back and forward from Bullin:

Last Christmas was the 20th anniversary of my joining Chanticleer in the then newly created job of president and general director. It has been a fantastic adventure, in so many ways, not the least of which has been the opportunity to get to know so many of you.

I’m writing to let you know that I will retire this fall. I’m thrilled also to let you know that, by a unanimous decision of our Board, Philip Wilder will succeed me. Many of you will remember Philip from his 13 years as a member of the ensemble, artistic administrator, assistant music director, and founding director of education. Since that time Philip has built a notable career in arts management ...

New Century Board President Mark Salkind’s lavish praise for Wilder hailed his leadership that “has been transformative for the organization, [as Wilder] dramatically expanded the orchestra’s footprint and reach.

Hope, from his Berlin home, joined the comments, saying that Wilder “has been a driving force behind the success of New Century Chamber Orchestra. He was responsible for bringing me to this exceptional orchestra, for which I shall always be grateful.

“During our time together, we have worked tirelessly and successfully, and whilst I am very sad to see him depart, I congratulate him wholeheartedly on this exciting new role.”

In the ever-interconnected leaderships of the city’s music organizations, Bullin came to Chanticleer from the San Francisco Opera Center, where her successor, Sheri Greenawald has served as director of the Center and artistic director of the Merola Opera Program since 2002. Greenwald has just now announced now that she will be retiring.

The star soprano and beloved teacher leaves an extraordinary legacy, and hundreds of grateful students.

Richard Egarr takes over from Nicholas McGegan and oversees an adventurous 2020–2021 season.