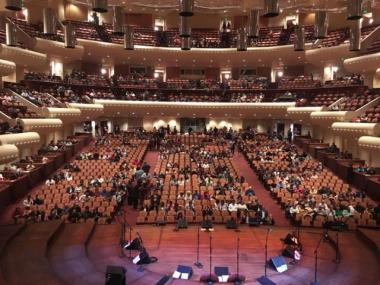 In the Musical Trenches of the COVID-19 Crisis

Thinking about how to shut down a company, cancel a season, dismiss everyone, and stop the room spinning around your head? The old recipe of “very carefully” doesn’t work — there is no time. It all hits suddenly and with full force.

Here’s a quick look at the disaster’s impact on organizations, certain to be exacerbated by a slump in donations expected in the aftermath of the stock market meltdown.

At the San Francisco Symphony, where the season was suspended and the orchestra’s European tour canceled days before it was to start, CEO Mark Hanson says:

“All of our lives are affected in major ways by the COVID-19 crisis and the arts are especially vulnerable. The community that arts and culture help build in our vibrant city is critical to what makes San Francisco special and we are all deeply hurt to be unable to provide those human connections during a time when they are needed more than ever.”

SFS operates in the city-run Davies Symphony Hall, which was shut down by Mayor London Breed shortly after she declared a state of emergency as early as Feb. 25. She closed all War Memorial and Performing Arts Center venues effective March 7.

Organizations performing in these venues were among the first in the nation to cancel events on such a major scale. The Performing Arts Center has a combined capacity for and audience of more than 5,000.

“While we were of course disappointed to silence our stage,” says Hanson, “we were fully supportive of Mayor Breed’s swift actions that rightfully led the nation in enacting such difficult but necessary protocols. We remain grateful and will continue to work closely with her office in the coming months in support of all.

“Like a lot of our sister-organizations, we are now faced with the loss of millions of dollars of ticket revenues for canceled performances and, as an uncertain future awaits us, the challenges only increase. Tremendously difficult decisions are being made in every organization to ensure coming out of the crisis as a whole.”

Arts organizations in the SF Bay Area, Hanson points out, are significant employers and major economic and tourism drivers.

As we navigate these challenging times together, my husband Joshua and I want to let you know that we are thinking of you. We hope that you and your families are staying healthy, safe, and optimistic.

For all of our lives, music has offered us a refuge and a haven in which we can remember our most important values and qualities — qualities about being human, like compassion and comfort. These are needed more than ever. The San Francisco Symphony musicians and I feel so fortunate to be able to continue to play for you in other ways, like our free streamed Keeping Score television episodes on YouTube, our music on Apple Music and Spotify, and our weekly radio broadcasts on KDFC.

I am grateful to share with everyone the music and stories that hold such deep meaning to me and my orchestra colleagues, and I hope they will be a reminder of our essential connection.”

San Francisco Ballet performs in another city-run venue, the War Memorial Opera House. The company opened its sumptuous production of George Balanchine’s A Midsummer Night’s Dream on March 6, repeated it the next day, and then, beginning with the Saturday matinee that was to follow, canceled the run, uncertain about the rest of the season.

With a speedy and amazing marshalling of its forces, SFB saved the production by performing it in an empty house and recording it on video, with Sandy Jennings producing. It will be streamed to ticket holders, and possibly to a wider audience in the future.

SFB Executive Director Kelly Tweeddale says the Ballet is looking at a $9.5 million-dollar impact from the closure in FY20, which ends on June 30, “based on what we know now. All nonessential expenses are on hold. We are taking this day by day.

“Now is the time to give back to help our community. Artists and arts organizations are an important part of how we will recover, how we will heal, and how we find our social connections.”

SF Opera, which had to cancel a few recitals, is in the hiatus between the fall season, which ended in December, and the summer season, scheduled June 7 – July 3, is up in the air, with everything else. If it happens, the summer season has Verdi’s Ernani, June 7-July 2; Handel’s Partenope, June 12–27; and the Bay Area premiere of Mason Bates’s The (R)evolution of Steve Jobs, June 20 – July 3.

That longer-range uncertainty also bedevils the planned annual meeting of the Music Critics Association of North America, slated for June 19–21 in San Francisco. Further in the future, but similarly jeopardized, is the Merola Opera Program’s 63rd season, July 9 – Aug. 22.

The Opera House is scheduled to be closed in the summer of 2021 for a major interior renovation to replace seats, and it is unknown if that can be moved up to the current period when the house is closed anyway — probably not.