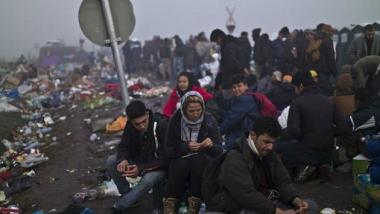 Musicians Speak Up - and Act - Against Mistreatment of Refugees

"May music play its part in this endeavor," Iván Fischer told a Berlin concert audience before conducting the Budapest Festival Orchestra in Mahler's Symphony No. 7. He was protesting the mistreatment of Syrian and other escapees by the Hungarian government, asking for the refugees — from war-torn countries in the Middle East — to be allowed to transit elsewhere in Europe: "I appeal to the German, Hungarian, and European authorities to free these people immediately so that they can go where they wish to go, and be registered where they wish to be registered.”

Fischer added: "The problem will be solved when enough tolerant people live in Europe and they welcome refugees warm-heartedly, generously."

This dramatic gesture came almost two weeks ago, and since then the situation became much worse, with tear gas and water cannons used against the refugees at the Hungarian-Serbian border.

Another prominent Hungarian musician, pianist András Schiff, told SFCV that the problem is far more widespread than just at the Hungarian (and now the Croatian) border:

The news from Hungary is terrible. Viktor Orbán is now Europe's most-hated politician. However, Europe can't possibly take in this many refugees, and this is only the beginning. Moving all of Syria, and much of Africa to the prosperous part of Europe is not a solution, it will ruin Europe.

Why are the rich Arab nations doing nothing? And why is the world not trying harder to solve the conflicts at the source, so that life would be livable at home?

The Budapest government's hostility to refugees — even before becoming overwhelmed by numbers — is especially unfortunate because in the aftermath of the Hungarian Revolution, the world — Austria, Germany, Canada, United Kingdom, U.S., many others — welcomed 200,000 Hungarian refugees fleeing the Soviet troops returning after they were ousted by virtually unarmed people who had suffered from years of Communist oppression.

I was among beneficiaries of the West's generosity, escaping when top editors of my newspaper, the Hétfôi Hirlap, were executed for their support of the revolution. Then, as now, the International Rescue Committee was among the most reliable and effective organizations to support refugees quickly and effectively. For the thousands of children among refugees, UNICEF is the main coordinator of aid.

If you know about Bay Area music events to assist refugees, please add that information as comments to this article or write to me at [email protected].