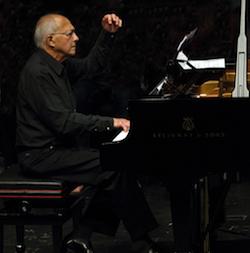 [email protected]'s 12th chamber music festival and institute, July 18 through Aug. 9, is called "Around Dvořák," and it will focus — according to festival directors David Finckel and Wu Han — "on the unfolding dynamic at the end of the Romantic era between the Viennese Classical tradition and the passionate nationalist expressions of a generation of Central European composers." Dvořák's connections are further described as:

Despite his humble self-identification as “a simple Bohemian musikant,” Antonín Dvořák in fact possessed a richly complex musical identity, nurtured by the multinational and multiethnic environment of the Austro-Hungarian Empire, where he grew up. With a craftsmanship rooted in the Viennese Classical tradition of Mozart, Beethoven, and Schubert, Dvořák further developed his musical style in some of his mature works under the mentorship of Brahms. He likewise turned an eager ear to inspirations from diverse cultures ranging from Russia through his native Czech lands and the British Isles all the way to African American spirituals of the United States.