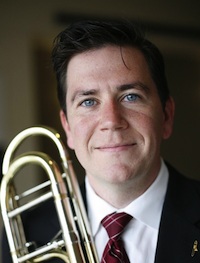 In an unusual combination, the 1597 antiphonal music of Giovanni Gabrieli and a commission from John Williams will headline a concert on June 12, in Weill Hall. Gabrieli's Sacrae symphoniae is arranged by San Francisco Symphony principal trombonist and SFCM faculty member Tim Higgins.

A commercial recording of Gabrieli's Sacrae symphoniae and the Williams commission at Skywalker Sound will follow.

A project years in the making, the inaugural concert and recording of the National Brass Ensemble is not only an extraordinary achievement in its own right but an opportunity both for our students and for the world beyond to experience brass playing at the very highest level.

I am honored to have these musicians with us, and I look forward to developing an ongoing relationship with the National Brass Ensemble in an annual residency offering outstanding brass instruction and world-class performances in the San Francisco Bay Area."

Besides Higgins, Mark Inouye and Robert Ward are also both Conservatory faculty members and principal players with the S.F. Symphony.