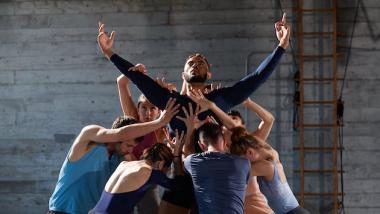 Amy Seiwert has received a few critical superlatives for her choreography, but nothing talks louder than a prestigious commission.

And Seiwert has garnered one of those, too: Her first full-length ballet was created for Imagery, her dance company, in a Joyce Theater Foundation Creative Residency, one of two residencies offered by New York’s premier presenter of dance, and the first offered to a company outside of New York City. The new ballet, titled Wandering and based on Schubert’s song cycle Die Winterreise (A winter’s journey), gets its first performance in San Francisco, however, on July 21-23, as part of Imagery’s seventh annual SKETCH series, at the Cowell Theater at Fort Mason.

The ballet will be seen a week later, July 27-29 at the Joyce’s 2017 Ballet Festival and again on August 3 at Jacob’s Pillow in Massachusetts.“Winterreise is a dramatic monologue that reflects the story of a wanderer who feels lost from himself and lost from the world,” says Amy Seiwert. “This ballet explores the theme of going on a journey, both internally and physically. How do we relate to the world, the world to us, how does the world around us change us, and how do we in return alter the world and our community?”

Seiwert, a long-time soloist with the Smuin Ballet, was mentored as a choreographer by Michael Smuin. She then spent two years in residence with ODC in San Francisco and has twice participated in New York City Ballet’s NY Choreography Institute.