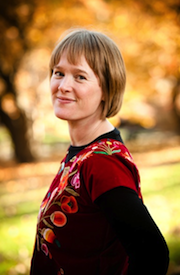 Oakland-born Anne Hege, who has a master's degree from Mills College, returns from Princeton University doctoral studies to become artistic director of the East Bay choral group Voci Women’s Vocal Ensemble. She succeeds Jude Navari, who has led the ensemble for the past 14 years.

Hege currently works as a vocalist, composer, improviser, and electronic musician, and performs original works with her duo New Prosthetics, the laptop ensemble Sideband, and the Carrie Ahern Dance Company.

In 2000, she founded and directed the Albany Community Chorus, and she has led various sacred and secular vocal and performance ensembles in the Bay Area, Mexico City, New Jersey, and New York.

For her doctoral research at Princeton, Hege developed a "body-centered theory of musical and multimedia analysis." Music News will try to follow up on that intriguing subject later.

The 20-voice Voci Ensemble last year celebrated its 20th anniversary. The ensemble, which champions music by and for women, was invited last year to participate in the International Tapestry Festival in Vancouver, B.C. Voci will be holding auditions for new advanced choral singers in August.