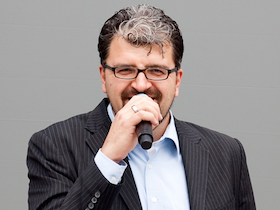 It's a big job, being responsible for San Francisco Opera's physical productions, with an annual departmental operating budget of $22 million — a sum greater than the entire budget of many opera companies.

On Monday, SFO General Director David Gockley announced the appointment of Daniel Knapp as director of production, effective Feb. 11, succeeding Greg Weber, who has joined the staff of Tulsa Opera as managing director.

Knapp will also have an important role with the Company’s Koret-Taube Media Suite, maintaining relationship with the Opera House landlord War Memorial administration, and San Francisco Ballet, the other principal tenant of the Opera House. A little more than a year from now, he will also have oversight of the company's new Diane B. Wilsey Center for Opera and 299-seat flexible theater in the War Memorial Building, scheduled to open in January 2016. Knapp commented on the appointment:

I look forward to engaging in a continuous dialogue within the widespread culture and entertainment network to convey our passion for the arts. I am privileged to have the role of converting design and staging concepts that creative teams bring to the production table into engaging, live opera experiences. It's a big move for my family and me, and we are looking forward to becoming close friends with the Belle of the Bay."

For the past six years, Knapp has been artistic production director and head of company management for Austria’s prestigious Bregenz Festival, where he served as house producer for both the Opera on the Lake Floating Stage and Bregenz Festival House.

Knapp’s professional work also includes serving as Austrian location manager for the 2008 James Bond film Quantum of Solace (which had a key scene at the Bregenz Opera), the filmed version of Tosca on the Floating Stage; director of his own opera touring company, Galicia Arts Ltd., including collaborations with the Ukrainian State Opera Kharkiv and the KammerPhilharmonie Lviv; arts, tour and event management that included work with Sting, David Copperfield, and Peter Gabriel; he was a host of a weekly radio show “Sound in V” that was aired on Austria’s ORF V; and produced the world premiere of An Authorized Adaptation of Frank Zappa’s Thing Fish.

Knapp will relocate to San Francisco from his native Germany with his wife and children in 2015.