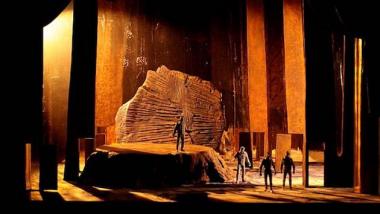 John Adams’s opera will have its commissioned world premiere in San Francisco on Nov. 21 but, as The New York Times reports, “New Yorkers will be able to hear a preview [two months earlier] at the Guggenheim Museum as part of the coming season of Works & Process, talks and performances that provide audience insights into the creative process.

“The fall season, which the Guggenheim announced on Tuesday, will also include new works by the composers Thomas Adès, Nico Muhly, and Steve Reich, as well as previews of the American Ballet Theater season and a new play at Lincoln Center Theater.”

The Guggenheim event is on Sept. 21 and 22, with the participation of Adams, librettist/stage director Peter Sellars, and SFO General Director Matthew Shilvock. Earlier this year, the three men recorded a conversation about the opera.

For Shilvock, it’s the first world premiere under his leadership, which began August 1, 2016, when he succeeded David Gockley, now general director emeritus. As part of the preparation for the production, Shilvock visits the SFO scene-building facility in Burlingame, where designer David Gropman along with Steve McNally (scenic artist in charge) and John Del Bono (workshop and warehouse foreman) oversee the carpentry, properties, and painting aspects of the production.

“Walking into the workshop you immediately come upon the production’s floor — a swirl of earth tones painted to resemble an oil spill but also strikingly similar to a topographical map,” Shilvock writes:

It is a work in progress with additional detail, areas of gloss, and flecks of gold dust still to be added, giving depth, intensity, and energy. Steve and his team are working from a marbled paper design by David Gropman, over which he lays a transparent grid, marked in feet.

Steve works out techniques in miniature, coming up with the right balance of detail and scale to ensure audiences can perceive the designs from a hundred feet away. Little tent markers dot the floor and the scenic artists create a 50-foot version, ready to be transported to the stage of the War Memorial.

SFO has provided a timelapse video of the floor painting:

Girls of the Golden West takes place in mining camps in the Sierra Nevada mountains during the California Gold Rush of the early 1850s. The libretto texts are drawn from first-hand accounts by Mark Twain, newspaper articles, letters, journals, original Gold Rush song lyrics, and political speeches and slogans. A detailed synopsis is published on Adams’s website.