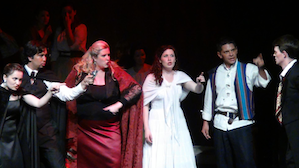 A very busy and ambitious program in town is Opera Academy of California. It was founded (in 2005) by Artistic Director Yefim Maizel, who has directed opera in the former Soviet Union, Europe, at San Francisco Opera, the Met, Santa Fe, and Wexford, among others. A true bicoastal, Maizel is now working on the Met's Onegin even as the Academy season unfolds.

Besides master classes, scene programs, and recitals, the Academy is also producing staged performances of Cavalli's Il Giasone, Mozart's The Marriage of Figaro, and scenes from Offenbach's Daphnis et Chloe and Tchaikovsky's Onegin. Season tuition is $4,150, but the program provides some work-study scholarships.

Il Giasone is a 17th-century Baroque take on the story of Jason of the Argonauts and the quest for the Golden Fleece from Greek mythology. In the opera, a hero is torn between a seductress skilled in magic and a fiercely loyal lover who will not let him forget his vows. Jun Nakabayashi is conductor; Maizel directs.

At the intersection of mythology and Baroque opera, there are the expected ferocious monsters, murder attempts, farcical situations, great suspense, interference from the gods, and much delightful music. Performed in Italian with English supertitles at the Southside Theater at Fort Mason Center (formerly one of two Magic Theater venues), remaining dates for the opera are July 18, 20, and 21 (matinee).

Conducted by Niels Muus, a Mozart specialist from Vienna, and directed by David Ostwald, Mozart's The Marriage of Figaro is performed on July 19 and 20 (matinée).