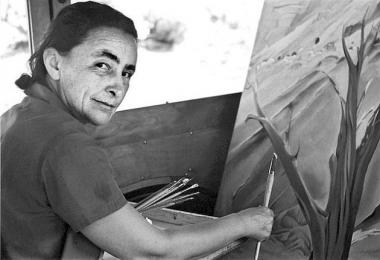 That ever-pioneering, brave little company, San Francisco's Opera Parallèle is going beyond "just commissioning" another work (as if that were not enough of a challenge). Founder and Artistic Director Nicole Paiement is collaborating with American Opera Projects and Seattle's Cornish College of the Arts, also securing a $35,000 grant from Opera America, to produce a major work, to be performed by all three participants.

Set for an April 2019 premiere, Laura Kaminsky's Today It Rains — with libretto by Mark Campbell and Kimberly Reed — will deal with the life of the iconic, American artist, Georgia O'Keeffe (1887–1986), at the point, in 1929, when she left New York to visit Taos and Santa Fe. With the journey, O'Keeffe embarked on a new phase of life and art, putting some distance between her and her husband, the great photographer Alfred Stieglitz, and discovering new subjects and ideas in the desert landscapes of New Mexico, which caused critics to dub her "the Mother of American modernism." The opera’s title comes from one of O’Keeffe’s letters.

For 20 years after 1929, O'Keeffe spent part of the year living and working in New Mexico, and she made it her permanent home after Stieglitz's death, in 1946. In addition to landscapes, O’Keeffe also painted area churches, crosses, and folk art, as well as Native American subjects, such as architecture and katsina tithu, commonly referred to as kachina or katsina dolls.

From a maternal grandfather, a Hungarian count who escaped to America during the 1848 revolution in that country, to her birthplace in Sun Prairie, Wisconsin, and her career in New York, the painter traveled the American landscape, which informed her work. (Still a decade in the future from the opera's period was an extensive trip to the Hawaiian Islands to paint tropical flora.)

Kaminsky is an award-winning composer of opera, orchestra, chamber, vocal, and choral music, known to Bay Area audiences most recently for the 2015 West Edge Opera production of her As One, an opera about gender identity. She wrote the libretto with Campbell and Reed, and the trio have been commissioned by Houston Grand Opera for a work titled Some Light Emerges.

Opera Parallèle’s current season continues on Feb. 19-28, 2016, when in collaboration with SFJAZZ, the company stages a production of Champion: An Opera in Jazz by Terence Blanchard, about the African-American boxing champion Emile Griffith (1938-2013). Peter Maxwell Davies’ three-character opera, The Lighthouse, will be given a new OP production April 29-May 1 at Z Space.