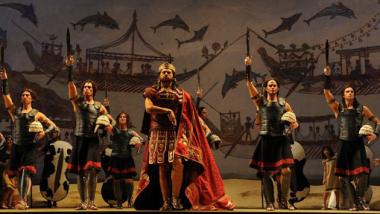 The late great Mozartean George Cleve (1936 – 2015) led the 2011 Opera San José production of Idomeneo, which one review called a “jaw-dropping, must-see production,” and SFCV greeted as “a rare and special opportunity.”

Its season-ending Magic Flute production in April canceled by COVID-19, the San José company now turns to sharing the video of that Idomeneo in free streaming beginning tomorrow (April 18) on its website. The recording will remain available there through May 18.

Idomeneo: ré di Creta is set at the end of the Trojan War and follows the king of Crete as he returns home. The tale was adapted from the French drama Idoménée by librettist Antoine Danchet for an earlier opera by composer André Campra. This setting offers a rich and complex score by Mozart and a libretto by Giambattista Varesco, sung in Italian with English supertitles. It has a run time of approximately 3 1/2 hours, including two intermissions.

One of the most momentous productions in our company’s history, this thrilling Idomeneo was born from an incredible collaboration between our founder, Irene Dalis, and renowned classicist, David W. Packard. The result is an astonishing love letter to Mozart, beautifully captured by videographer Jim Taskett, with each frame meticulously edited by Dr. Packard himself. We are so thrilled to be able to relive this stunning artistic achievement in beautiful, high-definition quality, and to be able to share it with opera lovers around the world."

The production features performances by artists who have since gone on to international fame. Leading the cast were tenor Christopher Bengochea as King Idomeneo, tenor Aaron Blake as Prince Idamante, soprano Rebecca Davis as Princess Ilia, soprano Christina Major as Princess Electra, tenor Mathew Edwardsen as the High Priest of Neptune, and Silas Elash as the Voice of Zeus.

Opera San José performs in the California Theatre, the elegant 1927 former movie palace meticulously restored to opulent splendor and now one of the world’s most intimate opera houses, with 1,122 seats (one-third of the War Memorial Opera House capacity).

General Director Khori Dastoor knows firsthand the challenges of being an artist, and it has shaped her responses to the coronavirus shutdown.