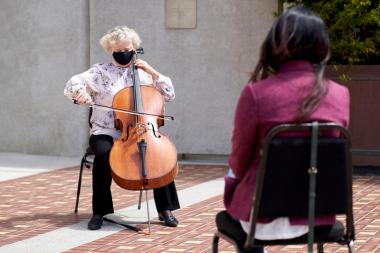 San Francisco Symphony has launched a concert series that may well be unique in the history of music — unless some medieval king or prince arranged such for himself, excluding the court and even family.

The SFS 1:1 Concerts feature live performances of one musician playing for one audience member, both with facemasks (except for woodwinds, naturally), and outside Davies Symphony Hall.

The announcement explains that as the COVID-19 pandemic prevents live performances, SFS has “sought ways to provide engaging live musical experiences for our audiences.”

And so “the launch of a unique concert opportunity that reimagines the intimacy of chamber music for our current socially distanced world,” 1:1 Concerts are “providing a safe way to experience the bliss of live music.”

Programs ranged from Bach Cello Suites to Hindemith’s 8 Pieces for Solo Flute, Malcolm Arnold’s Fantasy for Trombone, and the world premiere of Fortetude #3, a new work for solo viola by Eleanor Aversa.

Guests for this initial set of 1:1 performances have been drawn from among “the Symphony family, community, and education partners, and members of the general public, including donors and subscribers.”

The plan is for an ongoing series, beginning at Davies Hall, later expanding performances through the city. Information about schedule, programs, and participation is promised soon.

This summer’s online festival offers its courses, master classes, symposium, and keynote addresses to a broader audience than ever.

Honk if You Love Mozart!

SF Girls Chorus Responds to COVID-19 With a Virtual Festival

Look for collaborations with Voices of Music, Berkeley Ballet Theater, and the Philip Glass Ensemble.