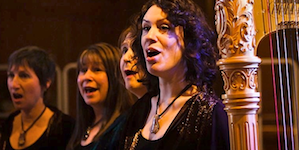 For the 10th anniversary of Martín Benvenuto leading the Peninsula Women's Chorus as artistic director and conductor, the group has commissioned a work by Los Angeles composer Kirstina Rasmussen, based on works by Bay Area poet Francisco X. Alarcón.

Songs of Night, says the composer, "explore the many connotations of night — including darkness, light, possibility, and dreams." One section is called Oportunidad.

It depicts a conversation between two friends, sharing their opposite reactions to a power outage in the city. I chose to first emphasize the negative viewpoint — with many voices chaotically repeating "the city has no electricity, what a nightmare!" — underscored by a dissonant, rushed, and disjunct piano part depicting honking cars, halting traffic and harrowed nerves.

The chaos melts into openness, as the poem shifts to the optimistic view of the outage. A solo voice sings the words "a chance to count the stars," unhurried, savoring every note. The earlier piano dissonances are revoiced in shimmering arpeggiations, and the rest of the chorus is won over, as they look up to the sky.

This piece is warmly dedicated to Martín Benvenuto, who has shared his love of song with countless people throughout his career, in both Argentina and the United States.

For me, this commission was about bringing together three things that I love: the epigrammatic, soulful and pointed poetry of Francisco, the sincere and unapologetic expressiveness of Kirstina's music, and the talented and dedicated women of the PWC, who all care deeply about the power of song.

Songs of Night will have its premiere on Dec. 7, at the PWC's first of three holiday programs, Illuminate the Night, in St. Mark's Episcopal Church, Palo Alto, followed by an afternoon concert in the same venue on Dec. 14, and finally on Dec. 15 in St. Patrick’s Seminary, Menlo Park.

The concerts culminate with an audience favorite, the late Conrad Susa’s festive Carols and Lullabies: Christmas in the American Southwest, a collection of songs originally from Spain, Catalunya, Puerto Rico, and Mexico; the set is accompanied by harp, guitar, and marimba.