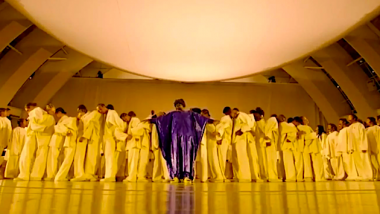 Opera fans might recognize several elements in Nebuchadnezzer, the opera by rapper Kanye West that premiered yesterday, Nov. 24, at the Hollywood Bowl. There’s the biblical source material, overlapping with Verdi’s Nabucco. Then the conceit, a claim to transcendent creative genius not unknown to Wagner. Even the slapdash nature of the production, announced just a week before its premiere, puts one in mind of the prolific and procrastinating Rossini.

But the critical consensus — from pop and classical listeners alike — suggests that none of that adds up to an opera. In a review proper, The New York Times’ Zachary Woolfe offers the word “oratorio.” A back and forth conversation in the Los Angeles Times between classical critic Mark Swed and pop critic Mikael Wood lands on the phrase “passion play.” Nobody liked the production, though spectacle seemed to reign.

Nebuchadnezzer featured rapper Sheck Wes in the title role, West as a sort of biblical narrator, and an assorted cast of hundreds, including Sunday Service, a gospel choir West has been performing with for the past year. West’s frequent collaborator Vanessa Beecroft directed. Fans were able to watch online (via streaming service Tidal) or in person at the Bowl. The performance lasted fifty minutes and started two hours late. The New York Post reported that tickets priced at $150 on Monday, Nov. 18, were selling for $20 day of.

West’s opera is the latest in a series of polarizing artistic statements, from the October release of his latest album, Jesus is King, to a string of personal image blunders that have alienated parts of his fan base. It all contributes to a dramatic whole, almost the stuff of opera.

Bay Area operagoers can choose between West Bay Opera’s production and a concert presentation by the Claude Heater Foundation.

Salastina’s 2021 Season Is Leading From Strength