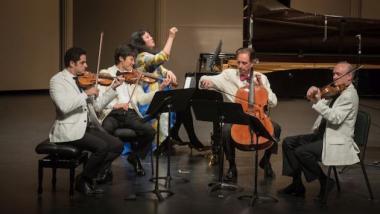 There are two kinds of music lovers: those who attended [email protected]’s last season and want to relive the experience and those who somehow missed the festival. 100 percent of this population will delight in the publication of [email protected] LIVE’s Russian Reflections, eight individual CDs, also available as a boxed set and digitally.

The name of the set is also the title of the 2016 festival, “Russian Reflections,” celebrating the cultural dialogue between Russia and the West from which “Russian classical music grew into one of the most powerful of all musical genres.” The festival featured chamber music by Rachmaninoff, Prokofiev, Sergei Taneyev, and Shostakovich, along with Mozart, Mendelssohn, Brahms, and other great composers, pointing to and demonstrating relationships.

Russia’s history is vividly reflected in its music, and the 2016 LIVE recordings celebrate one of the most remarkable and artistically rich traditions in Western classical music, from the twilight of the empire through the revolution and into the Soviet era.

Performances include Tchaikovsky’s Souvenir de Florence and Serenade in C Major, Rachmaninoff’s first Trio elegaique, works by Alexander Scriabin and Cesar Cui, Modest Mussorgsky’s Songs and Dances of Death, and Shostakovich’s Spanish Songs. You can listen to excerpts from these and other performances on the collection at the [email protected] LIVE site.