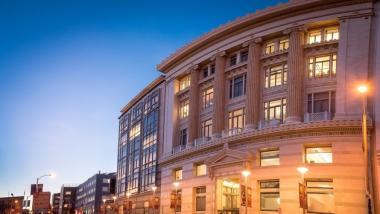 The San Francisco Conservatory of Music spent 2017-18 inaugurating new programs like Roots, Jazz, and American Music, announcing new faculty hiring, and finalizing plans for a new building downtown that will supersede if not replace the still-relatively-new Oak St. building, a testament to the energetic expansion of the institution under its president David Stull.

Lost in the noise of construction was the sheer number of quality concerts that SFCM produced last year. 2018-19 promises more consolidation as the newly launched programs settle in and begin to generate discussion of their musical merits. On the face of it, the newly announced season looks promising, especially in its engagement with different constituencies within San Francisco.

The RJAM program features in the Conservatory’s kickoff weekend, on Sept. 30, with students sharing the stage with their SFJAZZ Collective colleagues and mentors at Miner Auditorium. That same day the historical performance department contributes a celebration of ragtime and the 150th anniversary of Scott Joplin’s birth, as well as the 130th anniversary of the births of May Aufderheide and Irene Giblin. (And if you don’t know the last two names, let me Google that for you: Aufderheide and Giblin.) In a neat parallel, the local, old-timey music theater group Theatre Comique does a tribute to ragtime on Broadway with singers Brian Thorsett and Katherine Growden, on Oct. 7.

The SFCM orchestra gets into action on Oct. 19 and 20, with Jonathan Ross conducting Witold Lutoslawski’s beautiful Symphonic Variations, along with Samuel Barber’s Second Essay for Orchestra, and Brahms’s Symphony No. 1. Christopher Rountree, music director of L.A.’s new-music group wild Up takes the baton for the Dec. 8/9 concerts: He conducts Vaughan-Williams’s Fantasia on a Theme of Thomas Tallis and the Ravel orchestration of Mussorgsky’s Pictures at an Exhibition, like a good boy, before he gets to break loose with Ashley Fure’s Bound to the Bow, a 2016 Pulitzer Prize finalist. Ah, but Steven Schick one ups Rountree on Feb. 24, when he brings the wondrous Pamela Z to play with the SFCM Chamber Orchestra in her Heiligenstadt Drone, a concert that also includes Anton Webern’s Symphony, Op. 21, Luigi Dallapiccola’s Piccola musica notturna, and Anna Thorvaldsdottir’s lustrous aequilibria, all of this interspersed with movements from Beethoven’s Symphony No. 1. Now that’s an unmissable concert.

And speaking of new music, there’s a major internal anniversary on March 17, when the student-run Hot Air Festival celebrates its 10th anniversary. Although flying mostly under the radar, it’s a chance for composition students to connect with other new-music makers in a completely organic way, as well as a chance for the locals to showcase their wares. Meanwhile, Nicole Paiement, who lately is in the news more for Opera Parallele and her guest shots at Dallas Opera, is leading the SFCM New Music Ensemble, which kicks off the season on Sept. 30 in the Concert Hall with Central Station, by Ian Dicke (class of ’04) and Steve Reich’s rare but marvelous City Life.

Also on the new music front, don’t miss the International Contemporary Ensemble, appearing as part of the biannual Rubin Institute of Music Criticism (Oct. 26), pianist Gilbert Kalish and friends celebrating the music of John Harbison (Dec. 1), and the Kronos Quartet (Jan. 30) in a performance that brings together local school children and musicians from SFCM's Conservatory in the Schools program, all in collaboration with the San Francisco Unified School District.

The musical theater and opera programs show off their wares later in the fall season, with Heather Mathews directing Francis Poulenc’s Les mamelles de Tiresias (Nov. 15, 16) and Michael Mohammed directing Brecht/Weill’s The Threepenny Opera (Dec. 6, 7). In the spring, Mozart’s Marriage of Figaro, directed by Jose Maria Condemi (April 5, 7) and Schmidt/Jones’ The Fantasticks (April 12, 13) go on the boards, while the historical performance department contributes a concert version of Handel’s Tamerlano (March 9, 10).

Two events in the fall and spring on Oct. 12 and Feb. 10, part of the Music for Food initiative, feature SFCM faculty, alumni, and students coming together to give performances that benefit the community, combating hunger and providing support for people in need.

It may be hard to keep up with everything going on at the Conservatory, but if you need an incentive, remember that these concerts are much cheaper than most, and some are free to the public.