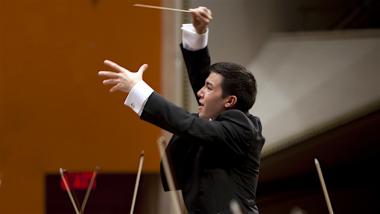 The Santa Rosa Symphony announced today that they had selected Francesco Lecce-Chong as the orchestra’s next music director. The announcement comes at the conclusion of a year-long process that saw five highly-regarded contenders appear with the orchestra. Lecce-Chong will take up the position full-time in 2019–2020, to allow him to fulfill prior commitments, but he will conduct three concerts in 2018-19..

SRS Principal Oboe and Music Director Search Committee member Laura Reynolds says, “Francesco is an inspiring presence on the podium, with deep commitment to the craft and a musical sense, or spirit, if you will, that invites players into a collaborative space to create our sound. I very much look forward to working with him!”

SRS Board Chairman Jamei Haswell says, “The Board’s vote was unanimous. He has the perfect balance of on-the-podium skills and off-the- podium passion for community outreach and music education. Francesco is an excellent communicator.”

Lecce-Chong becomes the orchestra’s fifth music director, succeeding Bruno Ferrandis, whose tenure comes to a close at the end of this season.

Correction: An earlier version of the article stated that Lecce-Chong was raised in Denver, instead of Boulder. Also, we omitted to state that he will conduct three concerts in Santa Rosa in 2018-19 before taking up the position full-time in 2019-2020.

The fifth contender for conductor position shows his style in a program featuring Bernstein’s score for On the Waterfront.