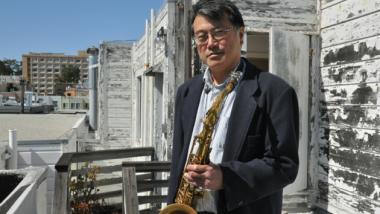 From his grandfather's famous and controversial racetrack in Japanese-occupied China to Fort Mason: Francis Wong is bringing a new musical work to the S.F. International Arts Festival on May 30 based on Wong Wei — a professional jockey and business manager whose "gamble" was to open a racecourse in occupied Tianjin during World War II.

Francis Wong, who is also co-founder and director of the production company Asian Improv aRts, says his grandfather tried to provide employment and entertainment during the occupation, with the help of local Chinese and Japanese investors, risking suspicion from both sides and the deadly post-occupation jeopardy of being considered a supporter of the Japanese military.

Wong says Wong Wei was a talented and resourceful man: "At least his profession was unusual for its time, I believe. I am inspired by his ability to multi-task, he would ride the horses in the races, do administrative work at the track, and organize investors to support the business, and ultimately the community. In so doing he sought to improve the situation of Tianjin's residents during the war but also to preserve the positive humanity that existed before the war between Chinese and Japanese."

Central to the piece will be the interaction — and drama — between shamisen (3-string lute) performer Tatsu Aoki and yangqin (hammered dulcimer) performer Yangqin Zhao, who is artistic director of Melody of China and was named prophetically at birth after the instrument she has become famous for playing — both iconic instruments of the Japanese and Chinese traditional musical cultures, respectively.

There is both an exploration of memory in their discourse as well as a reflection from today's viewpoint, as our generation of artists seek to heal the rifts of World War II. In addition to the colorful presence of both Aoki and Zhao, dancer Lenora Lee will add her unique and compassionate movement language to the visual collage.

Serving as context and community will be the balance of the ensemble, hailing from diverse cultural and musical backgrounds.