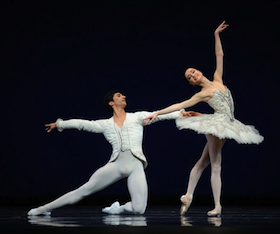 Every major performing arts organization uses the season-opener as a dressy, fancy event to raise funds and rally the faithful among benefactors and audiences.

The San Francisco Ballet's opening galas in the War Memorial are among the biggest and most lucrative of such events. On Wednesday, the gala signaling the company's 81st repertory season raised a record $2.4 million, according to board chairman John S. Osterweis.

(A bit of statistics: In the still-young West, the city's Symphony is 103 years old, the Opera 91, and the country's oldest ballet company began as the San Francisco Opera Ballet in 1933, hence the designation of 81. In fact, before and during World War II, several seasons went dark, so it's not really the 81st season, but definitely the age of the company.)

The biggest hits of the varied gala program were virtuoso performances — such as Frances Chung's charming solo from Val Caniparoli's Lambarena, the breathtaking elegance of Mathilde Froustey in Victor Gsovsky's Grand Pas Classique, and the infectuous humor of the Pas de Cinque of Johan Kobborg's Les Lutins.

Calling Kobborg's Jerome Robbins-style piece a "dance for five" is a bit of a stretch, but not by much: Pianist Roy Bogas and violinist Kurt Nikkanen — playing spirited music by Wieniawski and Bazzini — were fully involved, especially Nikkanen, and they helped to unleash some hilarious and acrobatic moves from Dores Andre (lookingly improbably manly), Esteban Hernandez, and Gennadi Nedvigin.

Pair after pair displayed the company's great strength of its cluster of stars: Sarah Van Patten and Tiit Helimets in the MacMillan Concerto, Yuan Yuan Tan and Damian Smith in Edwaard Liang's Finding Light and more. Many more.

The Ballet Orchestra, under Martin West's direction, did a fine job. They have their work cut out for them — and the musically inclined audience has much to expect — during the season, which has what West calls "the most diverse repertoire of any company I know."

With all the attention on gory injuries in professional football, a sport which is mostly about the use of force, equally widespread accidents in dance are hardly ever mentioned, perhaps because against the obscenely overpaid players, most dancers must claim unemployment compensation between seasons. Also, against the "highlights" video replays of injuries on the field, it is rare that even serious, debilitating accidents on stage are noticed.

After the gala, I coincidentally forwarded an article about dancer injuries and one response mentioned Vanessa Zahorian's accident at the gala.

What accident? Dancing with Taras Domitro in the Diana and Acteon pas de deux just before intermission, Zahorian did slip, but after the usual collective breath intake by the audience, she got up and continued dancing without any visible sign of distress. Nobody rushing in to cart her off, providing a convenient pause for more commercials.

I learned from this post-gala correspondence what apparently few among the audience of 3200 noticed. When she fell — probably slipping on sweat on the stage, and her shoe, with rosin on it, got caught — she broke her foot (the fifth metatarsal) ... and she continued to dance the entire piece on a broken foot.

How tough are dancers? After a mandatory two weeks completely off the foot, still on crutches, Zahorian is planning for the future, and probably will be back on stage in time for Cinderella. Hats off to her and all dancers.