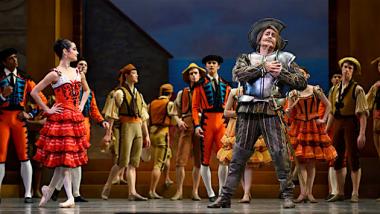 Friends and others ensconced in Davies Hall, you who are often reluctant to cross Grove Street to the War Memorial because you prefer to hear music more than watching dancing to it, harken to this good news.

San Francisco Ballet’s next season is chock-full of great music, performed by an excellent orchestra. Culling from the information released today about the 2019 repertory season’s 58 performances:

Russia is in the forefront, as usual for ballet, in the music and original choreography of two of the season’s full-length works come from there:

Tchaikovsky’s best-known music, for Nutcracker, has been heard regularly for decades at some 30 performances per season by the company, which gave the fundraising classic its U.S. premiere in 1944. It runs Dec. 12–29, 2018. Following the 2019 opening night gala on Jan. 23, the repertory season consist of eight programs, from Jan. 25 to May 12. The season announcement has an unusually high number of TBA’s — five slots are “to be announced.”

One of the greatest contemporary Russians of them all will be well represented in the season-closing Program VIII, the return of Alexei Ratmansky’s Shostakovich Trilogy, each of its three acts named after Shostakovich’s music used in it: Symphony No. 9, “Chamber” Symphony, and Piano Concerto No. 1.

Program III, from Feb. 14 on, will have Tomasson’s The Fifth Season, set to the music of Karl Jenkins; Harald Lander’s Etudes, to piano music by Carl Czerny (arranged by Kundage Riisager); and another encore work to be announced.

Program V, opening on March 27, still has two works to be announced in addition to a new ballet by Possokhov.

Program VI, beginning on March 29, has a reprise of Justin Peck’s Rodeo: Four Dance Episodes, set to the music of Aaron Copland, but different from the eponymous 1942 work by Agnes de Mille. A new ballet by Liam Scarlett and an encore work are still to be announced.

Perfection in a Program Tailor-Made for S.F. Ballet