SF Conservatory of Music to Stream All 2020–2021 Performances

Back in the old days, Robert Commanday used to tell me to pay attention to the SF Conservatory’s student recitals, whenever he thought I was slacking. Well now, with its facilities and concert halls closed to the public, the entire 2020–2021 season of concerts at the Conservatory are now slated to be streamed online, and even if SFCV won’t have the ability to remark on all 68 offerings, it is nonetheless a welcome development for music lovers. Because, in fact, a good student performance is often highly professional. Also, the Conservatory hosts a variety of faculty recitals and other performances throughout the year that are very worth tuning in for. And this is the inaugural year of Edwin Outwater’s tenure as SFCM music director.

High on the list this year, for us classical nerds, is the appointment of Jessie Montgomery as artist-in-residence at SFCM. In an interview with The New York Times last week, Montgomery was addressing the sudden interest in her music as a band-aid response to the summer’s Black Lives Matter protests, saying, “If you don’t place [concert programming] in a larger philosophical context of an organization, if you isolate it, it becomes empty.” It’s a sentiment that was previewed by DuMarkus Davis in an SFCV interview a week ago, in which he detailed how the Conservatory was prepared to go farther than that, and here we are.

Montgomery should not be seen as a token composer; she is clearly one of the stars of her generation, with commissions abounding from major organizations. SFCV readers may have encountered her music on an Oakland Symphony concert we reviewed last year, when Michael Morgan conducted her Banner. Montgomery is a big “get” for a Conservatory that has been on a roll in attracting resident artists and new faculty, and she will give masterclasses and teach a composition seminar in her year here.

Of the 68 concerts streaming this fall, eight performances across genres have been specially chosen to bring audiences an “(e)Motion Boost.” These programs will feature multi-camera HD video in addition to composer interviews, faculty storytelling, trivia factoids, and mini-documentaries on how each program was made. Some of the highlights of these eight programs include:

•  The Telegraph Quartet (streaming Oct. 15) performing a new work by Eleanor Alberga, Korngold’s String Quartet No. 3, and Beethoven’s Quartet in C-Sharp Minor, Op. 131. Three of the San Francisco-based quartet’s members are SFCM graduates and all four players are on the faculty. This is a quartet that has come into its own. It’s highly worthwhile to hear them.

•  The String and Piano Chamber Department (Oct. 30) is featuring two faculty members, violist Dimitri Murrath and violinist Ian Swensen, in a concert that begins with Murrath and Swensen leading Nokuthula Ngwenyama’s Primal Message for viola quintet. Ngwenyama may not be a household name, but she is an Avery Fisher Career Grant winner, a composer who has performed her music with major orchestras such as the LA Phil and at the White House for the 10th anniversary of NPR’s Performance Today, and she’s director of the Primrose International Viola Competition and president of the American Viola Society. Also on the concert are Shostakovich’s String Quartet No. 9 and Brahms’s Piano Quartet in A Major, Op. 26.

•  Roots, Jazz, and American Music faculty Edward Simon and Chad Lefkowitz-Brown and the SFJAZZ Collective’s Lyle Link perform side by side with students as the culmination of a residency to conceive, workshop, and rehearse their original material and arrangements of jazz standards. Duke Ellington’s landmark Black, Brown, and Beige, along with Stevie Wonder’s “Living for the City,” Marvin Gaye’s “What’s Going On?” and much more. (Nov. 19)

•  The SFCM Orchestra, directed by Outwater, begin its concert with two works by William Grant Still, moving on to Aaron Copland’s rarely played Music for the Theatre, and then to Brahms’s frequently played Serenade No. 2 in A Major, Op. 16. (Dec. 12)

•  Radio Operas (Dec. 17). The Opera and Musical Theater department performs two one-act operas originally written for radio: Gian Carlo Menotti’s delightful, if dated The Old Maid and the Thief, which contains the aria that innumerable sopranos have auditioned with, “Steal Me, Sweet Thief,” and then Comedy on the Bridge by Bohuslav Martinů, which contains no famous numbers but is a gem nonetheless from an underappreciated 20th-century genius.

In addition, don’t miss, this fall:

•  Cellist Jean-Michel Fonteneau in recital (Oct. 12). Fonteneau is a longtime faculty member whose recitals are always a high point of the SFCM year. On this recital, J.S. Bach rubs shoulders with Mario Davidovsky (Synchronisms No. 3), Tania León, and Gregor Piatigorsky.

•  Jeffrey Thomas, director of American Bach Soloists, gives a masterclass on Baroque performance on Nov. 9. Thomas created the ABS Academy and has been a renowned teacher for years; if you like the Baroque, you’ll want to see his masterclass.

•  SFCM Percussion Ensemble, Dec. 2. New-music fans are going to love that Devonté Hynes (aka Blood Orange) has a piece on this concert: Perfectly Voiceless, created for Third Coast Percussion and premiered on the group’s 2019 album Fields. Couple that with Julia Wolfe’s Dark Full Ride for four drum sets and what could be better? If minimalism isn’t your thing, there’s lots more on this concert, which finishes up with Iannis Xenakis’s Peaux (from Pléïades).

•  Sarah Cahill, piano, Dec. 13. I would say never miss a recital by Cahill, but that’s obviously impossible since she averages, what, one a week? No wonder she’s on top of current music: she’s played all of it. The industrious and brilliant new-music advocate is bringing music by Tania León, Reena Esmail, George Lewis, and Aida Shirazi, along with a work by 2016 SFCM alumnus Riley Nicholson. 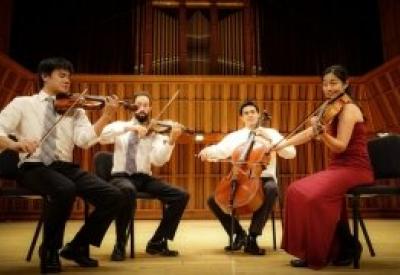 SF Conservatory of Music Puts Muscle Behind Commitment to Inclusion

Partnering with the San Francisco Symphony, SFCM creates a groundbreaking commissioning program, as well as other inclusion measures.

The lauded conductor has a long history with the City by the Bay.