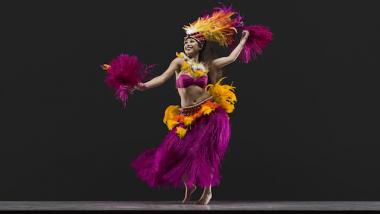 San Francisco's unique Ethnic Dance Festival has served thousands of performers and audience members for four decades, as a beacon illuminating the city's celebration of national, ethnic, and cultural diversity.

In a surprise move last year, the festival, ousted from its traditional home at the Palace of Fine Arts, moved into the War Memorial Opera House. While we thrilled to the usual cavalcade of dances from around the world performed by local community groups, along with a few world-renowned artists, the last season looked and felt different.

The new venue transformed a series of performances into a unified, thoughtful, moving spectacular, which created a well-deserved buzz in town, filling the house for the second performance.

Besides a return to the “Opera House ambiance,” expect the 2018 Ethnic Dance Festival to be special this year, and not in the Church Lady sense of that word.

The festival opens with a free public celebration of performances in the San Francisco City Hall’s rotunda at noon on July 6. Two different programs will be presented in the Opera House July 14 and 15 and July 21 and 22; tickets are priced $25-$45.

“It is thrilling to watch the festival come together,” says Executive Director Julie Mushet. “We’ll have two beautiful weekends at the Opera House with dance and music from 16 world cultures. The performances begin with a celestial Yu’pik dance from Alaska not presented in 200 years and culminates with an Afro-Peruvian finale incorporating 40 cajónes on the stage.

“New works are especially inspiring this year, including a Tahitian legend about love and arrogance, Pujllay dances new to the Western stage from the Yamaparáez communities in Bolivia, and a monumental world premiere by Korean master artist Kyoungil Ong. Personally, I find Chinese dances honoring Ann Woo especially appealing.”

The anniversary festival has been readied ever since the last season ended a year ago. Auditions, selection, programming, and many other aspects of the preparation have been worked on by Mushet and new artistic directors Patrick Makuakane, Latanya d. Tigner, and Mahealani Uchiyama, assisted by Carlos Carvajal and CK Ladzekpo, who are now emeritus artistic directors after 12 season of serving as artistic co-directors.

The festival brings 300 Bay Area dancers and musicians representing a wide array of cultures to the Palace of the Fine Arts.