A whole year after San Francisco Opera has gone into COVID-19 hibernation, the company is awakening with a bang. A year of cancellations, disappointments, and uncertainty!

A year: That’s good for 584 continuous performances of the entire Wagner Ring of the Nibelung (8,760/15 hours).

This arithmetic sleight of operatic hand is not accidental. While as SF Opera prepares to go live (see below), for many enthusiasts, the highlight of the coming month will be the streaming of SF Opera’s sold-out performances of the Ring cycle. Conducted by Donald Runnicles and filmed in HD in the War Memorial Opera House during the June–July 2018 run, the cycle will be streamed at sfopera.com on this schedule, from Saturday mornings at 10 a.m. through Sunday midnight:

Looking forward to March and way beyond is what SF Opera Executive Director Matthew Shilvock does:

I have so much optimism for the future, not only the immediate return of opera but for where we go next. As we welcome Eun Sun Kim as music director, we look towards our centennial in 2022–2023 and to our second century.

This is an inflection point where we expand and diversify our art and our audience, reconnecting our amazing Bay Area community to the vital storytelling power of opera. Simply put, we want to be more to more people. I look forward to a future marked by experimentation and innovation. The new directions of our spring programming are just the beginning.”

For those who crave live opera in person, even at a distance, SFO is hosting some real-time, drive-in events at the Marin Civic Center. Highlights of the spring season’s live events include:

The production is directed by Matthew Ozawa and with an English translation by Marcie Stapp. Conductor Roderick Cox makes his company debut, leading the SF Opera Orchestra in a socially distanced ensemble. Because of health protocols, the opera will be presented without chorus. 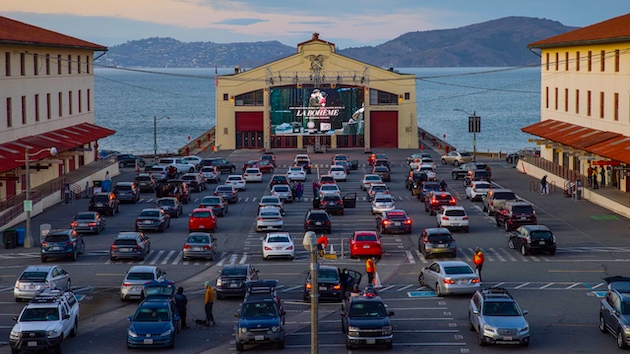 Audiences for the drive-in performances have a choice of purchasing tickets for one of two neighboring locations on the Marin Center campus. The Fairgrounds has a view of the set and live performers, while the Lagoon area allows ticket holders to experience the performance live via simulcast to a drive-in movie screen. Tickets must be purchased in advance (no onsite tickets sales) and the performances will go on rain or shine.

The project of performances at Marin Center has the cooperation of the County of Marin, of Marin Public Health Officer Dr. Matt Willis, and the Director of Cultural Services.

Dr. Willis says “I’ve been so impressed that every piece of the production has been designed around the health and safety of the audience and the artists. We’re thrilled to be partnering with San Francisco Opera to bring this event to Marin. It’s fitting that this happens at the Marin Center, which has played a key role in every phase of our pandemic response. Our community came here for Covid testing, and then for vaccinations and will come to support their health through the power of the arts.”

Organizations employing essential workers such as healthcare workers, teachers, and grocery workers, as well as community organizations in Marin can request free tickets from [email protected]. A stream of the production will be available to purchase for $25 shortly after the final performance.

— In Song: a series of brief video portraits by SF Opera artists with stories and song, from classical to bluegrass to spirituals. Performers of the In Song series include soprano Amina Edris, mezzo-sopranos Jamie Barton and J’Nai Bridges, and tenor Pene Pati.

Bridges launches the series on March 11, with a medley of spirituals and scenes filmed in Tacoma, Washington, and the Blue Gallery in New York City. Barton will explore the mezzo-soprano’s roots coming up in “the Pocket” in Georgia — a remote valley without Wi-Fi, where she was steeped in the music of gospel and bluegrass. Edris will share traditional Egyptian music that infused her childhood in Cairo, and Pati takes the audience to his home while singing traditional Samoan and Maori music.

— Atrium Sessions: intimate, short-form video performances, filmed in the company’s Dianne and Tad Taube Atrium Theater. The Atrium Sessions include performances of miniature masterpieces by Debussy, Clara Schumann, Florence Price, Noël Coward, and Gabriela Lena Frank, among others. Debuting in April, these short videos will be shared every few weeks.

— North Stage Door Podcast: of stagecraft and performance at SF Opera. The series features luminaries of the field, including opera stars, composers, directors, writers, craftspeople, and musicians from the pit to the stage, showcased in the 45-minute long, four-episode series.