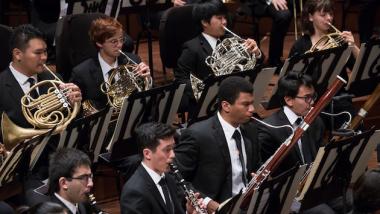 The SFSYO will play the world premiere of Iranian composer Anahita Abbasi’s …within the shifting grounds … at the March 4 concert in Davies Hall. This is a partnership and co-commission with the International Contemporary Ensemble (ICE), part of ICE’s education program of collaborations with youth orchestras around the country.

The performance of Abbasi’s work will be live-streamed on the Symphony’s Facebook page on March 4 at approximately 2:20 p.m. Pacific Standard Time. Abbasi, who is pursuing her Ph.D. in Composition at UC San Diego, is the winner of the 2015 ASCAP Foundation Morton Gould Young Composer Awards.

SFSYO Music Director Christian Reif, who conducts the concert, describes Abbasi’s work as “an exploration of the shifting of different sound layers, in instrumental groups and with a specialized percussion quartet and trombone trio.” The piece, Reif says, is “evocative of sounds you’d hear in nature, for example rain, birds, and the breathing of nature itself.”

ICE members and the composer have been in San Francisco for several days of rehearsals and score readings, activity described as “an incredible experience, where young musicians not only learned from acclaimed guest artists but also took away experiences about innovation, experimentation, and creative thinking, all skills that they can take with them in any profession they choose to go into.”

The major work on the program is Beethoven’s Symphony No. 7. In addition to …within the shifting grounds… the first half of the concert also includes music for small ensembles: Giovanni Gabrieli’s Canzon septimi toni à 8 and Sonata pian’e forte, Carl Ruggles’s Angels for muted brass, Richard Strauss’s Serenade in E-flat Major, Opus 7, and Michael Burritt’s Fandango 13.

The orchestra is performing two bon voyage concerts before heading off on an 18-day tour around Europe.

The sixth edition of the battle of the bands showcases five youth orchestras and raises money for charity.