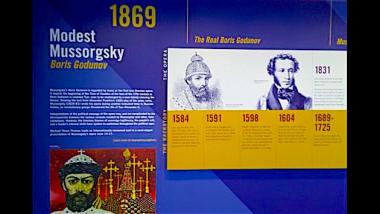 “Times of Trouble: the Intersection of Music and Politics” is prompted by the Symphony’s upcoming production of Mussorgsky’s Boris Godunov, but it goes far beyond the scope of the opera. “Times of trouble” are amply evident beyond 17th-century Russia.

Boris Godunov, according to the exhibit, is “a profound example of a historical opera relevant to the times and society of its premiere and beyond.” Writer Alexander Pushkin and composer  Modest Mussorgsky have communicated political/social ideas through the ages:

“Using their art as their language, composers may support or subvert those in power openly or through veiled musical statements. In times of repression and totalitarianism, art can powerfully convey a message beyond the notes, giving voice to the voiceless.”

S.F. Symphony Music Director Michael Tilson Thomas’s involvement in education and social issues goes back a long time — generations, in fact — to the days of his grandparents, Yiddish theater stars Bessie and Boris Thomashefsky. As MTT once said:

When I was growing up I was surrounded by people who had a connection with the Yiddish theater, which had an attitude of great adventure and of social activism. Much of its repertoire concerned issues of the time: women’s rights, labor rights and concerns regarding assimilation, language and more. These issues were put onto the stage so that people could observe them, comment upon them, and express different social and political opinions.

The current exhibit, “Times of Trouble,” is shown through June 30 on the first-tier lobby of Davies Hall; admission is free for concert ticket holders. It is the third in a series of a new SFS initiatives that began this year. The first show focused on Leonard Bernstein, the second on Maurice Ravel. Panels and photos of the current one deal with composers and works at various intersections of politics and music.

The title and theme of the exhibit come from Russian history and what is called “Smutnoye Vremya,” the period of political crisis that followed the end of the Rurik dynasty (1598) and ended with the establishment of the Romanov dynasty (1613). During this period foreign intervention, peasant uprisings, and the attempts of pretenders to seize the throne — all part of the Pushkin-Mussorgsky treatment — threatened to destroy the state itself and caused major social and economic disruptions.

Besides detailed historic information from the time of the “real Boris“ to recent performances of the opera, the exhibit includes panels about:

Leta Miller's book Music and Politics does what few histories or musicological studies do: offers a lively and entertaining read dealing with San Francisco's history of classical music.

Other Minds 2015 Merges Art and Politics

The 20th anniversary edition of Other Minds offers a number of commemorations, not least those tied to founder Charles Amirkhanian's personal history.