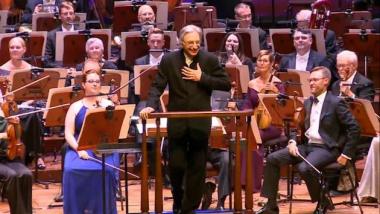 UPDATE: The San Francisco Symphony announced on March 12 that its upcoming tour to New York and Europe with Music Director Michael Tilson Thomas has been “canceled due to the rapidly changing developments and risks related to COVID-19 (novel coronavirus).

“Travel restrictions, concert cancellations, and venue closures in New York and throughout Europe have made it impossible for the Symphony to travel at this time. The tour — scheduled to begin with performances at New York’s Carnegie Hall March 17 and 18, followed by 14 performances in ten cities across Europe March 21 – April 7 — was to be the orchestra’s final tour led by Michael Tilson Thomas as music director.”

Any time more than a hundred musicians and their instruments are to be transported by planes and buses on another continent for appearances in different countries each night, it’s a logistical challenge bordering on a nightmare.

But now, as the San Francisco Symphony is preparing for a historic tour of Europe, of 14 performances in 10 cities, March 21–April 7, those challenges are compounded by political upheavals, Brexit complications, new attitudes to the U.S. on the European continent, and — especially — Coronavirus-prompted travel restrictions and widespread flight cancellations.

And yet, SFS is determined to crown a quarter century of touring with Michael Tilson Thomas at this last outing under MTT’s direction before he turns over the baton as music director to Esa-Pekka Salonen in the fall. Tour logistics for this outing are being managed by SF Symphony Tours and Media Production Manager Joyce Wessling, with tour management by Askonas Holt, travel arrangements for the orchestra by TravTours, and logistics for the musical instrument cargo overseen by SF Symphony Production Manager Tim Carless.

The hugely ambitious tour is to begin with two performances in New York’s Carnegie Hall, March 17 and 18, featuring on the first night Stravinsky’s The Firebird, Saint-Saëns’ Cello Concerto No. 1 with Gautier Capuçon, the New York premiere of the SFS-Carnegie Hall co-commission I Still Dance by John Adams; and Mahler’s Symphony No. 6 on the 18th.

Having followed press coverage of orchestra tours in Europe and Asia, and received many illustrated reports from SFS Director of Communications Oliver Theil, I remember challenges and glories of touring.

As always, there is the logistic challenge of musicians on one plane to one destination and the instruments on a cargo plane to another city ... then uniting them all. On the way to the Lucerne Festival, for example, when the orchestra flew to Zürich, taking a bus to Lucerne, the instruments were trucked to Los Angeles, there “palletized,” and flown to Luxembourg, then trucked to Lucerne. Sometimes there is nail-chewing suspense awaiting everything coming together in time.

“Regardless of where we tour in Europe our cargo always arrives in Luxembourg,” said Theil some years ago. “That’s the major cargo hub facility in the area. So whether we tour to Germany or France or Austria, we go through Luxembourg.”

A relatively minor but often perplexing problem has to do with time zones. Four years ago, when SFS performed in South Korea for the first time, Theil left San Francisco on Sunday, wrote from Seoul, on what was Monday here and Tuesday there: “We just arrived and have a press conference this morning then some various musician activities later today. First concert is tomorrow, Wednesday. We are 17 hours ahead of you.”

In a bigger picture on that tour, there was the presence of SFS violinist Kum Mo Kim, a veteran of 41 years with the orchestra, who was a child prodigy in her native city of Seoul. Her father, a conductor, founded the first symphony orchestra in Korea in 1948, which became the Seoul Philharmonic.

From the It’s a Small World Dept.: One of conductor Kim’s successors in Seoul was Kyung-Soo Won, whose daughter, Alisa Won, was board chair of San Francisco Classical Voice until a couple of years ago.

During the 2016 tour of Asia, SFS musicians were welcomed in the Chimei Museum in Taiwan’s Tainan City and its unique collection of violins — some 1,300 of the best instruments in the world. Six SFS violinists were treated to the rare privilege of playing some of the precious instruments. The orchestra continued to Shanghai, Beijing, and several concerts in Japan.

On a European tour in 2014, a day off in Paris was spent with trips to the Louvre and the van Gogh exhibit at the Musee d’Orsay, day trips to Versailles, Giverny or “descending into the famed but slightly creepy catacombs or just getting lost and eating one’s way around the various arrondissements of Paris.” Clarinetist Steve Sánchez had planned to propose in Paris, and he popped the question to girlfriend Stella Shi at the Rodin Museum. Unlike the sculpture in front of her, she didn’t have to think about it long: She said “yes.”

A winning tradition on tours is softball games with local orchestras, with the San Franciscans demolishing the New York Philharmonic, the Philadelphia Orchestra, and the Tokyo Philharmonic. In New York’s Dewitt Clinton Park, the SF Symphomaniacs took on the Metropolitan Opera orchestra, and principal trumpet Mark Inouye was once again the game’s MVP, belting two home runs and playing flawless shortstop in the 18–7 win over the Met.

In 2012, SFS arrived in Beijing at a historic moment, as Theil reported:

Aside from much international media coverage about the new regime, the timing has meant very high security measures and spotty internet connections for the usually well-connected orchestra, with much access to our usual media blocked, with severe restrictions on Facebook, Twitter, YouTube, and anything Google. Television and phone calls home that mentioned the transfer of power were mysteriously cut out."

On the same tour, the orchestra was super-busy, with concerts on Wednesday and Thursday in the Shanghai Oriental Arts Center; Friday in Beijing’s National Centre for the Performing Arts; next Monday in Tokyo’s Suntory Hall, and Tuesday in Bunka Kaikan.

In the here-and-now of 2020, before the orchestra leaves in just three weeks, it will prepare with public pretour performances that are part of the regular SFS season, all conducted by MTT. They are:

The S.F. Symphony Packs Its Bags for Asia With Style

Soloists Yuja Wang and Mark Inouye dazzle in a preview of the program slated for the S.F. Symphony’s upcoming tour.