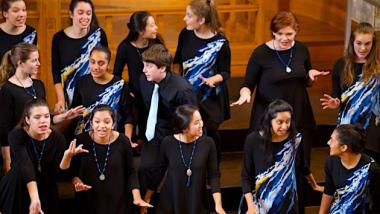 The European Choir Games in Gothenburg, Sweden, last month brought together 171 choirs and some 6,300 singers from 47 countries for competitions, but only two choirs from the U.S.

Besides Sharon Paul’s University of Oregon Chamber Choirs, representing the U.S. was the Cantabile Youth Singers of Silicon Valley — and they prevailed, winning a gold medal and a silver diploma in top-level categories.

Artistic Director Elena Sharkova and Associate Artistic Director Jace Wittig led Cantabile’s 56 students from Los Altos and Los Gatos, who participated in the event in Sweden. Qualified by prior success in international competitions for the Grand Prix level of the youth choir category, they were going up against 16 university and high school-level choirs from around the world.

Choir member Jessica Carlson from Los Altos found the experience rewarding as an opportunity to showcase the choir’s hard work and strengthen an international community of choristers:

“Every choir we sang with, marched with, ate dinner with, and chatted with throughout the tour was friendly and eager to create relationships with each one of us, and wanted to share as much of the experience as possible with us,” Carlson said.

“The overwhelming show of love and support between all the choirs showed me that music truly creates communities that foster friendships and respect, even in the setting of a competition between us all.”

Bravi competed with such American songs as “Soar Away,” “Deep River,” and “O, Mary Don’t You Weep,” and others.

Sophie Dewees tells of her experience in Vocalise:

As this was my last trip with Cantabile, this tour was especially important to me and I loved taking advantage of the unique experiences that touring with Cantabile provides for the last time. On this tour in particular we made an effort to interact with choirs from around the world in addition to competing. Whether through giving California post cards and poppy seeds or simply singing “Imagine,” a Cantabile favorite, we always invited other choirs to participate with us.

A particular moment that stood out to me was standing in the parking lot last night waiting for the bus ride to the hotel with a choir from Russia. Although we didn’t speak the same language, we were able to communicate through singing both Russian and American pieces. This moment was the epitome of my time in Cantabile: We are able to connect, interact, invite, and spread ideas all through a shared love of singing.

Entering its 25th year, Cantabile has provided music and performance education to hundreds of children between the ages of 4 and 18. Many have gone on to attend prestigious colleges and universities, many with music as a primary area of focus, and with a lifelong appreciation and capacity for making music. Singers are grouped in six choirs, based on age and level.

Enrollment for the Fall 2019 season is open now, send email to [email protected] for audition information.

Correction: As originally published, this article misstated the name of the Paul Caldwell-Sean Ivory piece that Vocalise performed.

The Colburn’s ensemble-in-residence ties the Marmen Quartet for the prestigious award.