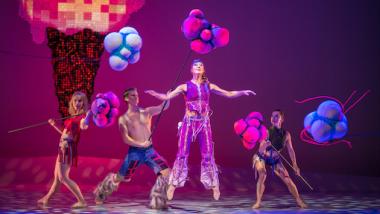 Smuin Features Contemporary Works in Its Final Program of the Season

Be present, poetic, and permeable. Above all, be dancing to captivating music.

These are the mandates at play in Smuin’s season-closing program, Dance Series 02. The San Francisco-based company may have dropped “ballet” from their name at the start of the 23rd season, but they’ve not shed the company’s deep classical roots. Reflective of how offshoots have formed and morphed as 21st-century choreographers craft new ballets for the company helmed by Artistic Director Celia Fushille, the May program honors tradition while pushing parameters to further establish an authentic, contemporary profile. Music is an effective conduit — with most dance companies — and especially in performances featuring Smuin’s expressive, highly tuned-in dancers.

Independent choreographer Trey McIntyre’s Be Here Now marks a return to Smuin. His previous work, Oh, Inverted World, set to music of indie-rock band The Shins, was an audience and critical success. The new ballet celebrates the 50th anniversary of the Summer of Love with a sound score that includes songs by Janis Joplin, Jefferson Airplane, The Mamas and the Papas, and others. Expect fantastic ensemble choreography and tight structures that appear organic, even improvised, but result from McIntyre’s intense attention to detail.

A world premiere by Smuin dancer Nicole Haskins, The Poetry of Being, brings forth joy. Simple and colorful costumes by former Smuin dancer Susan Roemer are well-suited to the work set to the Allegro and Adagio of Tchaikovsky’s Sextet in D-Minor, Op. 70. Also known as “Souvenir de Florence,” the sextet for strings isn’t among Tchaikovsky’s most spectacular works, but its innocence and intricacies allow room for Haskins’s considerable promise as a relatively young choreographer to unfold.

For Broken Open, a haunting, driving score by cellist and composer Julia Kent includes looped cello, found sounds, and electronics. Urgent, lyrical, penetrating and absorptive — Seiwert’s work stands out as next-gen Smuin and suggests that Haskins might soon follow in Seiwert’s award-winning footsteps. Or, more likely, Haskins will carve out of her history a compelling path to claim as her own.

Performances: May 12–13 at the Lesher Center in Walnut Creek, May 19-28 at the Yerba Buena Center for the Arts in San Francisco, and June 2–3 at the Sunset Center in Carmel. More information and tickets at the Smuin website.

Launching its season with terrific dancers and successful explorations of new repertory, Smuin Ballet appears poised to climb to a higher level in the regional ballet firmament.