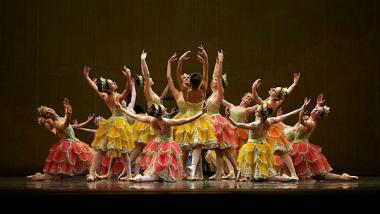 So Much More to Nutcracker Than the Sugar Plum Fairy

There is ballet, there is dance, there are spectacular shows, and then there is Nutcracker. The grand holiday perennial, which is beginning its 74th season in the War Memorial, attracting an audience of close to 100,000, is truly in a class by itself, responsible for introducing ballet — and sometimes theater itself — to generations of youngsters.

It started with a libretto adapted from E. T. A. Hoffmann’s The Nutcracker and the Mouse King, and choreographed by Marius Petipa and Lev Ivanov to a score by Tchaikovsky in 1892. Moderately famous in Russia and Europe, Nutcracker exploded as an American phenomenon, beginning right here when the San Francisco Ballet premiered it in 1944 in Willam Christensen’s choreography.

How long ago was that? Franklin D. Roosevelt won reelection over Thomas E. Dewey that year, becoming the only U.S. president elected to a fourth term, and through the decades since, the Nutcracker’s presence in the U.S. only grew. Popular as it is around the world (where it is not associated with Christmas as much as here), there is no match for the work’s ubiquity in this country: Some 800 productions take place annually in more than 120 cities.

Major American ballet companies are said to generate about 40 percent of their annual ticket revenues from Nutcracker holiday blitzes. A rough calculation for San Francisco shows that it’s also true for the company that started it all:

With 23 San Francisco Ballet performances before Christmas and eight more after, that’s 31 x 3,126 (number of seats in the War Memorial), yielding 96,906 seats filled. Assuming — based on experience — full houses at most shows, and taking the $39 to $348 price range into consideration, S.F. Ballet is looking at a significant contribution to its income stream that could conceivably amount to as much as half of its annual budget.

S.F. Ballet’s current version, by Artistic Director Helgi Tomasson, was created in 2004, and it’s set in San Francisco during the 1915 World’s Fair — the Panama-Pacific International Exposition. Because of the large cast and so many performances, some 200 dancers are participating in the run.

Training and rehearsals for the December Nutcracker run and for the shows in the January–May season begin in the summer, so what you see in the theater today has six months of hard work behind it, along with exhaustion and injuries. No wonder that when baseball players of the Oakland A’s played soldiers in the Oakland Ballet’s Nutcracker, they had to take breaks while the dancers were just warming up.

And, a word of warning about children and Nutcracker: San Francisco Ballet rules call for no children under age 3, including babes in arms. Tickets required for everybody, including children, who “must be seated with an accompanying adult; no lap sitting.”

In the S.F. Ballet's opening night of the Nutcracker, a beautiful stage was set, and standout dancers delighted the crowd with this seasonal classic.

No Nutcracker Without the Kids: Behind the Scenes at Oakland Ballet