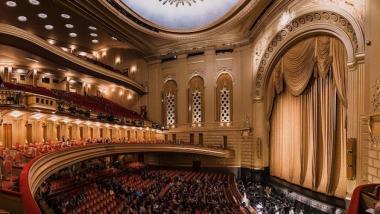 Some Shutdown Extensions Now Set Through Mid-2021 and Beyond

The New York Daily News headline on Friday — “Broadway extends shutdown through May 2021 as Great White Way remains dark” — is sending shivers down the spine of performers and audiences alike.

“The show won’t go on along the Great White Way until the middle of 2021 — at the earliest. Ticket sales for Broadway performances in the city were suspended through May 30, 2021, extending the Theater District shutdown into a second year, the Broadway League announced.”

Even against widespread attempts by musical organizations to return to live, in-person performances, many companies have given up on plans to reopen this year or even next spring or summer. Barbara Jepson in The Wall Street Journal writes, “American symphony orchestras are emerging from lockdown, adopting a variety of approaches to live performance. Soccer stadiums, ballparks, and streets have been pressed into service as safe outdoor venues for socially distanced audiences,” citing the examples of the LA Philharmonic, Houston Symphony, Philadelphia Orchestra, Cincinnati Symphony, New York Philharmonic.

The country’s largest opera company, New York’s Met, will remain closed until September 2021 — furloughing its more than 1,000 performers and employees, who have not been paid since the beginning of the pandemic. And this morning’s news from The New York Times confirmed that the New York Philharmonic has canceled the rest of its season.

Back in March, with much gnashing of teeth, organizations gave in to the mandate to close for two weeks. And then ...

Yes, uncertainty is one of the most difficult problems and challenges. If you rob a bank and are caught, eventually you’ll find out about the length of your prison term. If you run an opera company or a symphony orchestra in the pandemic, your incarceration seems indefinite, without possibility of parole.

“The greatest uncertainty is around the course of the virus. If the numbers continue to improve in Houston, we’re on a challenging path, but at least we can plan. But if things take a turn for the worse, and new restrictions come into play, that will strike a blow while we’re already fragile. And we just don’t know what the virus will do.”

For a revealing comparison, consider what happened to restaurants in San Francisco, shut down for indoor service for seven months, then told they can open for limited service on a Tuesday, investing in purchases, construction, hiring... and ordered on Monday not to open yet.

Some summer events — Merola Opera Program and [email protected] among them — originally postponed their events by a year, and some organizations with postponed fall seasons still hope for reopening in the spring. Many did postponements in small fits and starts.

On the other hand, there are some long-range delays in reopening plans, as in the just-announced Solo Opera postponement of Derrick Wang’s Scalia/Ginsburg, an opera right out of today’s news headlines:

Solo Opera’s August 2020 production of Scalia/Ginsburg was canceled due to COVID-19. It is now postponed until the Lesher Center for the Arts in Walnut Creek reopens and reschedules us for Summer 2021. For now, we are basically closed, saving our funds (most of which were restricted for this opera) until we can produce this show.

Obviously, with the passing of Justice Ruth Bader Ginsburg, we were devastated to not be able to produce this opera during her lifetime and the 2020 election year as originally planned. But we look forward to when we can share it with our community and honor her life achievements.

The opera concerns the bipartisan friendship and love of opera shared between the two justices. The message of the show — as seen through their famous duet, ‘We are different. We are one.’ — will be a healing moment for us all when we can come together to enjoy music once again."

SF Ballet wants to get back into the War Memorial in January, right after the seat replacement project is completed. SF Opera, with the longest lead time requirements for contracts and physical production, is still planning for an April 25–May 16, 2021, spring season of Rossini’s The Barber of Seville, Alexander Zemlinsky’s Der Zwerg (The dwarf), and concerts with the SF Opera Orchestra. SF Symphony’s 2021 plans are not yet firm. And, of course, it’s all “subject to change.”

And this just in: “San Francisco Opera announces the launch of the Company Relief Challenge, a $5 million matching fund to help underwrite the Company’s support of its members and sustain San Francisco Opera through the unprecedented disruption of the COVID-19 pandemic. The fund will match one-to-one all annual gifts, pledges and donated ticket funds through Nov. 23, 2020. This critical challenge is made possible by the inspiring generosity of longtime Company sponsors John and Cynthia Fry Gunn, Pitch and Cathie Johnson, and Jan Shrem and Maria Manetti Shrem.”

SF Opera to Resume Streaming Productions From Past Seasons

Classic performances of Tosca, Attila, and The Marriage of Figaro are slated for October.

SF Conservatory of Music to Stream All 2020–2021 Performances

There’s a wealth of great music a couple of keystrokes away thanks to the Conservatory’s new initiative.