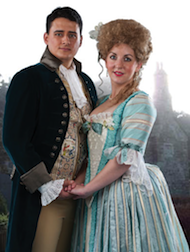 The next show from Lamplighters is a "jewel box production" of The Sorcerer, with costumes and props, but on a minimal set, and with the orchestra on stage — only three semi-staged concert performances of the opera between March 16 and 24, one in Walnut Creek, and two in Herbst Theatre.

The two-act comic opera is the result of the third collaboration by W. S. Gilbert and Arthur Sullivan. Gilbert's original story, which served as the basis for the libretto, is about a love potion that causes everyone in the village to fall in love with the first person they see. The pairing of mismatched couples is accompanied by comic duets, a patter song, a contrapuntal double chorus, a love duet, a soprano showpiece, and more.

Two dozen musical numbers include "The air is charged with amatory numbers," "Time was when Love and I were well acquainted," "With heart and with voice," "The Tea-Cup Brindisi," and "Oh, joyous boon! Oh, mad delight."