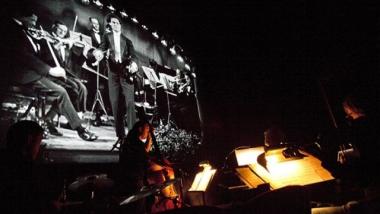 The Sound of Music Rules at S.F. Silent Film Festival

Back in the olden days, movies were made without sound. But when old movies are screened today, “silent” is a misnomer. In the Castro Theater, where the 23rd annual San Francisco Silent Film Festival (SFSFF) unspools May 30-June 3, each film is accompanied by illustrious musicians, as some 40 composers and performers from around the world arrive in the city.

What has become the largest, most prestigious festival devoted to silent film in North America, SFSFF will present 23 programs, including 11 recent film restorations.

The films come from eight countries besides the U.S.: Denmark, France, Germany, India, Italy, Japan, Sweden, and the USSR... not Russia, but the Soviet Union.

Indeed, it is the celebrated Soviet director Fridrikh Ermler — regarded in the company of Sergei Eisenstein, Charlie Chaplin, and G.W. Pabst, but little-known in this country — whose newly restored Fragment of an Empire will be among the highlights of the festival. It’s the story of a soldier shell-shocked in World War I, recovering his senses in 1928 St. Petersburg and dealing with the realities of Soviet life. Historian Paul Rotha has called the work “the epitome of the Soviet propaganda film, realized with extraordinary skill of technical achievement.”

Stephen Horne is preparing a score, and he and Frank Bockius will accompany the premiere of the film on June 3. Horne and Bockius are among the musicians participating in the festival, including Donald Sosin (New York), the Berklee Silent Film Orchestra (student composers, conductors, and players from the Berklee College of Music in Boston), Günter Buchwald (Germany), Sascha Jacobsen and the Musical Art Quintet (San Francisco), the Matti Bye Ensemble (quintet from Sweden and Finland), the Mont Alto Motion Picture Orchestra (Colorado), and Alicia Svigals (New York).

The festival begins on May 30 with Universal Pictures’s new restoration of Paul Leni’s 1928 The Man Who Laughs, an adaptation of Victor Hugo’s 1869 novel about a man disfigured from childhood, which stands with the great masterworks of the silent era. This presentation also marks the world premiere of a commissioned score by the Berklee Silent Film Orchestra.

The festival award will be presented to Jon Wengström and the Swedish Film Institute (SFI) at the premiere of SFI’s new restoration of The Saga of Gösta Berling on June 2. The film, which served as Greta Garbo’s first starring role, is accompanied by the Matti Bye Ensemble

Closing the festival on June 3 is the North American premiere of a restoration of Buster Keaton’s Battling Butler, which will be accompanied by the Mont Alto Motion Picture Orchestra.

What distinguishes silent-film musicians from those in other genres is their multitasking, real-time responses to the “main event” on the screen. Also, similar to those playing in opera or ballet theater pits, they are invisible. Charlie Cockey, a veteran of both cinema and music, with a special interest in the silents, says:

Having studied the films they play for, and using time cues, visual cues, and often pre-prepared themes or motifs, these musicians improvise within that framework in ways a jazz musician might envy, going with the moment, playing as the film dictates.

At least that’s what the best of them do, the Donald Sosins, the Stephen Hornes, the Guenther Buchwalds, Maud Nelissens, Neil Brands, and a handful of other European (and Japanese) pianists who haven’t made it here, or at least not recently.

Those who insist on through-writing the entire film when playing solo soon find themselves relegated to the sidelines, because one must always be ready for the unexpected: a film may be projected at a speed other than prepared for; the print showing may not include footage a through-written piece needs, or conversely may include footage for which there has been nothing pre-written.

Those who play extempore are more able to respond to the moment, and the audience is the true winner. I remember a discussion with Maud Nelissen in which, while playing, she suddenly got the idea that a Bach piece she knew would go great right there, only that piece was in a major key, and a minor was needed — so she simply made it minor — and it worked a charm. She was thrilled when I noticed what she’d done, and doubly thrilled that it worked so well."

Some of the musicians in the festival with special distinctions:

* Conductor, composer, pianist, and violinist Günter Buchwald is a pioneer of the renaissance in silent film music. He has provided live accompaniment for thousands of titles, playing at festivals worldwide from Berlin to Tokyo, both solo and with other musicians through his Silent Movie Music Company.

* Playing a variety of instruments that include piano, glockenspiel, violin, and percussion, the Matti Bye Ensemble is led by Matti Bye, silent-movie pianist at the Swedish Film Institute since 1989 and one of his country’s leading film composers.

* Violinist-composer Alicia Svigals is among the world’s leading klezmer fiddlers and a co-founder of the Grammy-winning Klezmatics, whom she led for 17 years.

A new film celebrates the choreographic artistry of the legendary film director.

Music of the Silents at the Castro Theater, June 1–4

The actors may be mute, but live performances from soloists and ensembles will accompany classic-film screenings.

Foxtrot Delirium Goes Over the Edge

Composer Martin Matalon’s score for a 1919 silent film comedy isn’t meant as underscoring, and that’s part of the problem.