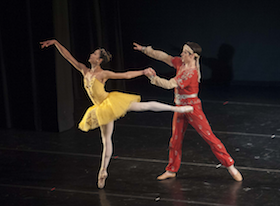 It might have been genetic engineering that produced the ultimate prototype of a ballerina, and named the result "Stella Abrera." In another laboratory, some heart and soul, warmth and grace were added, and there you have the young woman of Filipino ancestry from Southern California, one of the top stars of the American Ballet Theatre for the past decade.

No need for science fiction, Abrera and her ABT partner (and husband), Santa Cruz's Sascha Radetsky, were right there, front and center, shining brightest among the featured dancers Friday at Festival del Sole's Dede Wilsey Dance Series Ballet Gala.

Their bravura performances in the Pas d'Esclave from Le Corsaire (the explosive Petipa choreography staged by Anna-Marie Holmes) and affecting lyricism in a pas de deux from Antony Tudor's Leaves Are Fading were memorable. Both of them dance without posing or reaching for effect; they are like musicians who immerse themselves in the music.

Ballet San Jose dancers carried the burden of the evening's specialty, a couple of recovered excerpts from Michel Fokine's "lost" Paganini, to Rachmaninov's music, a rather awkward piece about the violinist (Damir Emric) playing his instrument, then not, having some unspecified but obviously agonizing problems, and eventually redeemed (somewhat) by Divine Genius (Amy Marie Briones) and eight — I counted them — Divine Spirits as the corps de ballet performed far from divinely. Keisuke Nakagoshi was the on-stage piano soloist.

I have heard the Russian National Orchestra (which, name withstanding, is not Russia's national orchestra) many times, usually in a performance range between pretty good and very good. This time, they broke out of that array, sounding like a volunteer circus band in a small Siberian village. It was oompah-pah, crash! bang!! of harsh, building-shaking fortissimos. I understand that Minkus is not Debussy, but I firmly believe ballet music should still be musical.

The conductor, George Daughtery (also responsible for the production of the gala), usually performs far better, so I don't know what happened. Kudos to the dancers for overcoming — mostly — the orchestra's chokepoints.

The next night at the festival, Frederica von Stade came to the rescue, flying in on a private jet from an engagement in Bellingham, WA, to sing at the Far Niente Winery in Oakville, substituting for Jesse Norman, who had canceled the engagement. (Norman has also rescheduled her July 31 "American Songbook" concert with San Francisco Symphony to Aug. 9.)