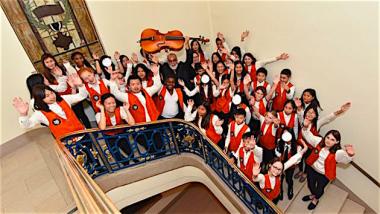 No excuse is needed to write about Miland, but this is a story that writes itself, the tale of a 3/4 cello as well as of sharing and giving, imparting the gift of music to young people.

In Alameda, where his father was coordinator of music for public schools for 35 years, young Emil played locally and ranged out to play with the Oakland Symphony Youth Orchestra, under Denis de Coteau; to the San José Symphony, then led by George Cleve; and to the San Francisco Conservatory of Music, where he played in a Bonnie Hampton masterclass.

Last year, in a flurry of multiple coincidences, Miland met and became mentor to 15-year-old Alexander Canicosa-Miles from Honolulu, whose Alameda-raised mother contacted Miland when “Alexander was taking lessons via Skype from a cellist in Shanghai,” but that’s another story. Miland recalls the beginning:

Alexander and [his mother] Marilyn came to my home in Pacifica and we began our friendship. Alexander was a bit shy but then he took out his cello and started in with the First Concerto of Shostakovich. He was really playing it!

I have spent so much of my career performing ... it was so exciting and heartwarming to hear his efforts, and how quick and responsive he was to new ideas. It was indeed gratifying to hear him at the next lesson. He had obviously done his homework. And the support of a loving parent is worth a million hours of scales.

Further, Alexander attended masterclasses with the self-same Bonnie Hampton at the Conservatory, and he has won the S.F. Symphony Young Musician Award, which Miland won at the same age. (Miland was soloist in the Johann Christian Bach Concerto in C Minor; Canicosa-Miles will play with the Livermore-Amador Symphony on Feb. 23, 2019, performing the first movement of Haydn’s Cello Concerto No. 1 in C Major.)

Getting back to the 3/4 cello, it’s Alexander’s old one, which he outgrew, and gave to Miland in gratitude for his support, to let him pass it on to someone who can use it. Says Marilyn Canicosa-Miles: “Alexander was very happy it was going to be played again. He is now playing a full-size cello.”

Asked about what music means to him, the young cellist said:

In times of chaos, music takes me to a place of solace and freedom of expression.  It has taught me to always choose kindness, practice patience, love abundantly, and appreciate the beauty that comes with every consonance and dissonance in life.

Miland, whose own cello is a 1718 Giovanni Grancino from Milan, is passing on Alexander’s instrument to students of the Aptos Middle School, who have been studying with him and other members of the San Francisco Opera Orchestra in the Opera ARIA Music Performance Residency.

Program administrator Ruth Nott says the cello would be a gift to the whole cello section at Aptos Middle School. “I’ve asked the music teacher to let one of the girls try it at home first, and see how she does at increasing her practicing, then they’ll trade to another student for a while. It’s a lovely gift.”

A cellist heralds in the New Year with two concerts, both of them involving old acquaintances, as well as new music.

Sonos Benefit Offers Singers, Miland, and All Them Bells