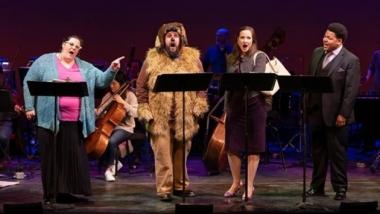 Tired of Cute Cat Videos? Here’s an Opera About a Dog and His Owner

Opera on film has been the story of the past year. So it was only a matter of time before the first … animated dog opera? That’s a title New Opera West, the budding Los Angeles company championing new work, can claim.

NOW’s latest project — Pepito, an animated short about the love at first sight between a dog and his future owner — was a collaborative effort from start to finish. Composer Nicolas Lell Benavides and librettist Marella Martin Koch wrote the piece on commission for Washington National Opera (part of the 2018–2019 American Opera Initiative). Then, Benavides and NOW Executive Director and Co-Founder Emily Thebaut talked about the possibility of a production.

“[We knew] it would work well in animated format,” explained Benavides. “Surprisingly, there are almost no animated operas (we found a few from a long time ago), and it’s probably because it’s such a labor and time-intensive endeavor. You need to have a great recording, which takes time to rehearse and produce, and then you need to hire amazing animators, who also need a lot of time.”

Benavides had that great recording, released last year, featuring singers from the premiere performance in Washington and musicians from USC’s Thornton School of Music. The NOW film takes a section from that recording — the heart of the opera, a duet between the character Camila and the eponymous dog Pepito — and gives it the animated treatment.

Watch the short here. It streams free, but New Opera West has partnered with Muttville Senior Dog Rescue in releasing the film. A donation on New Opera West’s website also goes to Muttville.

Pocket Opera Is Right on Time With PocketWatch