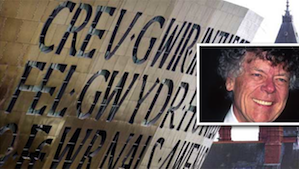 "A new opera titled Usher House will have its stage premiere at Welsh National Opera in 2014. There is just one surprising factor: The composer is Gordon Getty, 77-year-old philanthropist, venture capitalist and son of oil tycoon J Paul Getty," writes Andrew Clark in the The Financial Times.

David Pountney, WNO’s chief executive and artistic director, announced on Friday that in return for performing Usher House the Cardiff-based company would receive a Getty donation of $2 million — more than enough to fund several other productions. For the Californian benefactor the deal represents a passport to respectability as a composer. For Pountney it is a huge risk. It suggests that a state-subsidised ensemble can be "bought" by any rich amateur who dangles a pile of money in front of it.

A graduate of the San Francisco Conservatory of Music, Getty is a long-time opera aficionado. His music, bland and inoffensive, is seldom performed, but you can hear it on Getty-funded recordings by the Academy of St Martin in the Fields and the Russian National Orchestra. Unlike WNO, both rely on private finance.

If that's a reference to the San Francisco Opera, there has been no announcement yet from the company. Another new Usher House opera, by Philip Glass, is scheduled at Long Beach Opera in January.

I have heard several bits and pieces of Usher over the years, and it's definitely Getty's best large-scale work (lieder is his forte), much more evolved than Plump Jack, which also had numerous sponsored performances. Dramatically, the ballet version of Usher House was not a happy experience in Napa, with "Eddie Poe" and his discombobulations interfering with the enjoyment of the music.