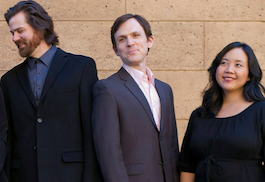 Vinaccesi Among Beneficiaries of S.F. Friends of Chamber Music

It's not quite an "Only in San Francisco" phenomenon, but certainly an unusual occurrence: that a musical ensemble would be formed in the New World to honor a virtually unknown 17th-century Italian composer with only a handful of surviving works.

Benedetto Vinaccesi (1666-1719) is the cause and namesake of the local group, formed in 2008 by Bruce Wetmore, Kindra Scharich, and Nanette McGuinness, which first performed at the 2008 Berkeley Early Music Fringe Festival. The ensemble plays mostly music for voice and continuo, such as Barbara Strozzi's 1651 Cantata ariette e duetti.

Vinaccesi is credited with some 450 pieces, few of which are known today. These include an oratorio (Susanna), a pastoral, and an aria from his opera L'innocenza giustificata, as well as a handful of motets, secular cantatas, and sonatas. He was first chorus master at Venice's Ospedaletto, and then "the principal organist for San Marco's second organ" — in an age when the organ provided livelihood for many musicians (including Bach, and others, all around Germany).

The ensemble — which performs next on April 5 at the Legion of Honor — Chamber Music at the Legion — is one of many groups supported by the San Francisco Friends of Chamber Music (SFFCM), which is turning 15 with an anniversary gala at Yoshi's San Francisco on April 7. Benedetto Vinaccesi: the Solo Cantatas, released on Centaur last year, was made possible through the Musical Grant Program, which is administered by SFFCM.

SFFCM has raised fund for 86 ensembles, of 336 musicians, through the years, beginning with the Alexander String Quartet, which became the endowed resident quartet at San Francisco State University.