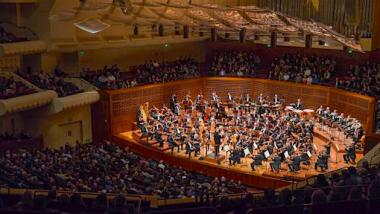 The Voice Has a Big Presence in MTT’s Farewell Season

It’s a decades-long puzzle: Why does opera-great Michael Tilson Thomas gird the globe regularly, but fail to cross Grove Street from Davies Symphony Hall to the War Memorial Opera House?

The San Francisco Symphony music director, about to launch his 25th and final season with the orchestra, is well-known for his interest and expertise in conducting vocal music, having received rave reviews for his many concert and semistaged choral and opera performances in Davies Hall, including Beethoven’s Missa Solemnis, Wagner’s The Flying Dutchman (landing in Davies again next season), Britten’s Peter Grimes, and many others.

One reason MTT may have stayed away from opera houses is that rehearsals there can take weeks or months, against — at most — three-to-four days of preparations for symphony concerts.

Lest this appear a personal hobbyhorse, here’s current prose from SFS itself: “An ardent interpreter of vocal music, Michael Tilson Thomas has further defined his tenure as SFS Music Director with performances of memorable choral and vocal works, from opera to art song to musical theater.”

And so, the vocal treasures of the 2019–2020 season include a wealth of what MTT is ardent about, climaxing with big choral/vocal works at the end of the season. Next conclusion of the next season will also mark when the baton passes to his successor, Esa-Pekka Salonen, a maestro with his own preference for vocal works.

MTT’s June 2020 finale will have both Wagner’s The Flying Dutchman and Mahler’s Symphony No. 8 (“Symphony of a Thousand”), one of the largest-scale choral works in the classical concert repertoire, in Davies Hall, giving MTT a grand exit.

The June 11–15 Wagner performances will feature Catherine Nagelstad as Senta, Stuart Skelton as Erik, and Greer Grimsley as the Dutchman. Soloists in the June 25–28 Mahler are Grimsley, Erin Wall, Sophie Koch, and Kelley O’Connor.

Both works feature the chorus prominently and Ragnar Bohlin’s San Francisco Symphony Chorus will be ready for the challenge. The chorus will have a major role in the season, filling a leading role in The Flying Dutchman, Mahler’s Eighth Symphony, and Brahms’s German Requiem, in addition to Bohlin-conducted performances of Handel’s Messiah (Dec. 13–14), and Bach’s Magnificat with Handel’s Dixit Dominus (April 4).

“I am thrilled,” Bohlin says, “that we will be duly challenged with some really big works in MTT’s final season. Ending the season with the Brahms, The Dutchman, and Mahler’s Eighth will be hard work, but especially exciting.”

At the very beginning of the season, the program will be prominently “vocal” — the Sept. 4 gala opening includes the “Ode to Joy” finale of Beethoven’s Ninth Symphony, and the Sept. 26–28 concerts feature tenor Nicholas Phan tenor in Stravinsky’s Canticum sacrum and the SFS Chorus in his Symphony of Psalms. Stravinsky’s Symphony in Three Movements is also on the program, along with the Haydn Cello Concerto No. 2, Oliver Herbert soloist.

Mezzo-soprano Sasha Cooke, who has more than a decade-long association with MTT and the SF Symphony, is engaged for a Symphony residency of performances and an educational project, which involves visits to San Francisco classrooms over the course of the school year where she will explore the relationship between literature and music with students. Cooke says:

An artist residency with the San Francisco Symphony feels like an even greater gift of artistic freedom than the one I’ve already experienced there over many years. For me, the SFS has always represented an artistic home. Through this residency, I hope to share different aspects of my artistic life and to deepen my relationship with the city and with Michael.

At concerts Jan. 9-12, Cooke will perform MTT’s song cycle Rilke Songs and selections from Mahler’s Des Knaben Wunderhorn. On May 31, Cooke will give a recital in the Great Performers Series.

“Many people associate Mahler solely with his symphonies,” Cooke says, “and yet I believe that his songs may truly be the most extraordinary part of his work.

“Similarly, many people only think of Michael as a conductor and do not realize what a wonderful composer he is, especially for song. When I approach Michael’s songs, I see a beautiful combination of simplicity and universality - both aspects that Mahler’s songs also represent to me.”

Soprano Julia Bullock is also an SFS artist-in-residence, and will curate and perform three concert programs in the season, illuminating the distinct voices of literary, visual, and musical artists.

“I first met MTT when I was still a student at Juilliard, and he hired me to sing West Side Story’s ‘Somewhere’,” Bullock says. “This was my first introduction to performing with a major symphony orchestra. The character who sings ‘Somewhere’ is an anonymous girl who, despite not having a name, affirmingly calls out that she knows there is a place for her and for all people.

“In the years since that performance, I too have looked for my ‘place’ as an artist and have found a clearer vision for what I want to say and how to say it. To be invited back to San Francisco next season is very touching and personally meaningful.”

On Feb. 20–22, Bullock joins Salonen to perform two poetic song cycles: Britten’s Les Illuminations, based on hallucinatory verses by Arthur Rimbaud; and Ravel’s Three Poems of Stéphane Mallarmé, which evoke the symbolist writer’s “mystery of somber abstractions.” Salonen has named Bullock as one of eight “creative partners” who will collaborate with SFS on an ongoing basis when he begins his tenure as SFS Music Director in September 2020.

In April, Bullock curates and performs a SoundBox program incorporating signature elements of the SoundBox experience, including performances by SF Symphony musicians, poetry readings, and immersive visual designs. The program pairs music by Nina Simone with keyboard music by Bach and chants by Hildegard von Bingen; music by Josephine Baker with works by Poulenc, Honegger, and Milhaud.

In June 2020, SFS presents a new iteration of “History’s Persistent Voice,” a program Bullock first developed during her residency at New York’s Metropolitan Museum of Art. Inspired by an exhibition of artwork and words penned by black American artists from the southeastern United States, the program incorporates traditional slave songs and new instrumental and vocal compositions performed by Bullock and SFS musicians.

Bullock explains: “I am deeply interested in artists who aim to have their voices liberated through their writing, and that is a shared thread through these three concert programs. From the poets Rimbaud and Mallarmé to the composers Britten and Ravel, to those who wrote blues and jazz, along with the contemporary pieces and new works we are commissioning, there is this amazing unleashing of individual voices.

“As an artist and classical singer, this concept resonates with me because I spend a lot of time trying to discipline and organize myself, but I think it’s very important to remember that one of the truest goals of music is to find expressive freedom.”

The popular mezzo-soprano justifies her adulation in a standout performance of an eerie Berlioz cantata.

For those living the lush life, the San Francisco Symphony is presenting an all-French program featuring soprano Renée Fleming in orchestral songs by Debussy and Canteloube.