San José’s Voices of Silicon Valley (VSOV) never shies from challenging music. Far from it, in fact. Under the steady guidance of Artist Director Cyril Deaconoff, the intrepid ensemble performs the most daunting of contemporary works. As Deaconoff puts it, “VOSV’s mission is to perform masterpieces of avant-garde music that audiences almost never hear and see in performance. With Stockhausen’s Stimmung, we brought it to Bay for the first time in 30 years.”

Now the group is airing a digital show dubbed “Together at Last,” which features Luciano Berio’s Cries of London, a rarely performed masterpiece originally written for The King’s Singers. VOSV will present a semi-staged version of this work and an optional 3D version for virtual reality (VR) headsets or 360 for smartphone, tablets, and computers. According to Deaconoff, “With Berio’s Cries of London we may be the first ever, as we can’t find any record of this well-known — through textbooks — work ever being performed in California.”

Deaconoff explained why he is thrilled to be presenting Berio’s piece: “Cries of London is one of the most ingenious works ever composed for a vocal ensemble,” he said. “Throughout the seven movements, Berio creates textures rich with melodic material where singers imitate cries of the merchants on the streets of London with changing scenes of sellers attracting customers, bragging about their products, sometimes lamenting lack of their finances. Then in the final movement “Cry of Cries,” Berio brings all the melodies and lyrics of previous movements together in a kaleidoscopic fashion.”

Berio’s vision gets a timely update in VSOV’s reading. According to a press release, “Stage director Sergey Khalikulov’s clever concept moves the action from the physical marketplace that Berio had in mind into today’s e-commerce, raising the issues of consumer insularity and data privacy by asking: ‘Who is buying and selling our information online?’” Deaconoff said that tackling the ethical issues of internet-based companies buying and selling information “makes this performance very relevant, if not even occasionally provocative.”

According to Deaconoff, the innovation extends to the whole way the ensemble is presenting the work, too. “The main difference from previous efforts is that for the first time in the history of this work — we are sure of that —the Berio performance is semi-staged,” he said. “The whole performance is a film-style production, with multiple images and pictures leading the viewer through it. The fact that this performance, while recorded live, is released digitally and available throughout the world (a creative way around COVID pandemic), is also new [to VOSV].”

He adds, “The fact that most of the concert is available through Virtual Reality — audiences can watch it through a VR headset or headphones and YouTube 360 surround video option — is very much in line with VOSV’s mission to combine singing and technology.”

In addition to Cries of London, “Together at Last” viewers will enjoy several other noteworthy pieces, Deaconoff said, “This program champions works of two very talented women composers: Reena Esmail (Los Angeles Master Chorale composer in residence) and Kenyan composer Nyikabi Kariuki, currently based in the U.S. The Gladiator film soundtrack, which was prereleased on our YouTube channel for everyone to see for free and get a taste of the mastery of our Berio singers, is also noteworthy, as is the Swingles Singers’ arrangement of Stephen Foster’s ‘Hard Times.’”

The first airings took place last weekend, but viewers have three more opportunities to see “Together at Last.” Tickets for are available via Eventbrite for showings on Friday, Nov. 19, Saturday, Nov. 20, and Sunday, Nov. 21 — all at 5 p.m. Click on “Select a Date” to purchase. Ticket prices range from $25 for the basic program, $50 for the 3D option, and higher prices for additional patronage.

A Trimmed-Down Stimmung From Voices of Silicon Valley

The electronic-music pioneer’s work continues to fascinate and confound. 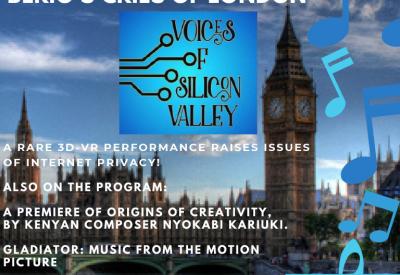