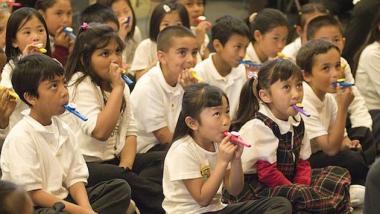 What Are the Changes Ahead for S.F. Symphony’s Education and Community Outreach?

The San Francisco Symphony was born in 1911, just five years after the Great Quake laid waste to the city. In the span of over a century, from such a difficult birth to its current international fame and dominant role in the city’s cultural life, SFS also fulfilled a more extensive role in music education and community projects than most orchestras in the country can claim.

Against that history and status, S.F. Classical Voice — a supporter and even a partner of the orchestra in community projects and outreach — reported disquieting news five months ago, about the Symphony’s cuts and suspensions in such programs as the adult amateur music-making program, Community of Music Makers, and the Instrument Training and Support (IT&S) program for middle and high schools.

Because the press was not invited to attend the SFS annual meeting earlier this month, Classical Voice turned to both the symphony administration and some attendees for information and comment about the status of education and community programs. No future budget numbers or specific plans have been released from the symphony, meaning we don't know the future depth of the cuts or how adversely the programs will be affected.

Officially, the orchestra is very much committed to these projects, but states that hard choices are necessary for the symphony to live within its means. Teachers, program administrators, and the beneficiaries of these programs, however, are understandably worried. The following is a summary of an extensive ongoing discussion of a complex and important subject.

As reported by SFS Director of Public Relations Robin Freeman, all three top SFS leaders — President Sakurako Fisher, Music Director Michael Tilson Thomas, and Executive Director Brent Assink — were unequivocal at the meeting of their support for education and outreach. They were also straightforward in calling attention to fiscal and organizational challenges. Of the $77.9 million operating budget for Fiscal 2015, the total cost of education and community programs is approximately $7 million. Some of the major programs are Adventures in Music, the SFS Youth Orchestra, Concerts for Kids, and Music for Families.

According to Freeman, Fisher told the meeting that Adventures in Music and IT&S are “an investment in the SFS’s future, and that reducing the amount of money dedicated to IT&S this year was an extremely difficult decision to make. She stated that it will take a village to restore and increase future funding for that and other programs, and that she appreciated participation and assistance by teachers and coaches in that process.”

Beyond paraphrased reports of what was said at the annual meeting, Classical Voice asked Assink for a statement, and he responded:

Since its founding, the SFS has been committed to bringing orchestral music to the young people of the Bay Area, and we have never wavered from this commitment. The education and outreach programs the symphony provides are among the most comprehensive of any arts organization in the world.

While we understand and value the great impact of these programs, maintaining them requires significant philanthropic support. Over the years, certain programs grow and others contract, as we work to best meet the needs of our community while remaining fiscally responsible with the funding we have available.

We continually look at all of our programs to assess their value and impact in our community and to best allocate our resources. We wholeheartedly encourage everyone in our community to join us in the effort to raise awareness and funding for programs that bring the joy of music to young people.

Among music teachers and educational program administrators who spoke at the annual meeting, pleading for strengthening and expanding outreach, was Tristan Arnold, music director at Ruth Asawa School of the Arts. He told Classical Voice of his presentation at the meeting:

Students have been benefitting from these programs for years and it became clear after some significant cuts that we needed to make it clear how impactful the symphony’s investment had been over the years. Putting a professional musician in a classroom absolutely transforms the experience for the student. One aspect is just the level of attention. Many middle school teachers will have 60 beginning musicians in a classroom at a time, and the IT&S program has meant that they get the kind of personal attention to technique that is crucial to develop.

Beyond that, it isn’t uncommon for a teacher to be leading a band, jazz band, choir, and string orchestra all in one day, and while we all strive to be well-rounded, the professional coaches provided by the symphony have expertise that would normally only be accessible to students whose families can provide private lessons. The program has also helped with things like purchasing equipment for the Burton H.S. marching band, cello bows for a middle school, or repairing a double bass at the School of the Arts.

We wanted more than anything to express the profound impact the IT&S program has made on our classrooms and to express our unwavering commitment to continue to work with them to make the power of music available to every child in the city.

In addition to statements by musicians, parents, and teachers, cellist and educator Vanessa Ruotolo presented written testimonials from those unable to attend. She prefaced her substantial packet by underscoring the partnership between SFS and the San Francisco United School District, which goes back to 1980. It was then that the schools superintendent proposed eliminating music programs in the wake of Prop. 13, but Yehudi Menuhin and SFS convinced the board of education to continue the programs, which, Ruotolo wrote, “Over the years have come to set a standard for what it means to ensure that every public school student has access to music education.”

Now that public schools don’t have the money to sustain what a music program requires, Ruotolo said support from SFS is needed more than ever.

The teachers testified that the 75-percent cutback in financing for the IT&S program — which supports over 4,500 instrumental students in 22 public schools — “sent quite a shock through the district music programs.” Acknowledging that SFS support has enabled tens of thousands of young students to learn a musical instrument and attend concerts, the teachers and administrators appealed for the continuation of programs.

Roosevelt Middle School band and orchestra teacher Daniel Donohue (president of the association of music teachers who work for SFUSD) wrote that the IT&S Program provides tickets at free or reduced prices, “supplemental repair or music supply requests that my small budget cannot afford, and most importantly — specialists on instruments that I may not be an expert in myself.”

Without the program, Donohue wrote, he and other music and band teachers are facing a situation where “most of my students cannot afford to take one-on-one private lessons, and the sectionals that the IT&S program provides help level the playing field for these students and give them opportunities to excel on their instrument at a level that would not be possible without it.”

Assink thanked everyone who testified, calling them “heroes of the music profession, who deserved applause for the difference you make in the lives of students.” He said the symphony never stops fundraising for its education programs and that it will continue to seek out people and organizations with the ability to contribute.