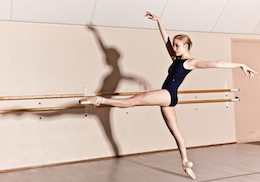 Where Double Bass and Ballet Meet

Shinji Eshima, Mr. San Francisco Double Bass, has always been a kind and persistent supporter of colleagues, and this time his hands reach across the seas as he is hosting a bass recital by Artem Chirkov from St. Petersburg — of Russia, not Florida.

Chirkov, the young but already famous principal bassist of the St. Petersburg Philharmonic, will give a masterclass at 11 a.m. on Sept. 23, in the S.F. Conservatory of Music; a demonstration class in the School of the Arts at 2 p.m. on Sept. 24, the same day as his recital in San Francisco State University's Knuth Hall at 7 p.m. All three events are free and open to the public. He will be accompanied by pianist Randall Benway.

A product of the Petersburg Conservatory and the Munich's Hochschule für Music und Theater, Chirkov has won first prize at competitions in his hometown and Moscow, in addition to Brno, Texas, and elsewhere. In 2004, he became the youngest principal double bass in the 130-year history of the Philharmonic.

The recital will include sonatas by Johannes Matthias Sperger and Frank Proto; transcriptions of works by Rachmaninoff, Shostakovich, and Bottesini.

Meanwhile, Eshima and the San Francisco Ballet are in London, to premiere RAkU, to his music, choreographed by Yuri Possokhov. The company's toured in Hamburg and Moscow this summer, and it is at Sadler's Wells now through Sept. 23 for nine performances of three mixed-repertory programs, including works by George Balanchine, Mark Morris, Christopher Wheeldon, and company artistic director Helgi Tomasson.

At an intermission of the Sunday matinee in London, Tomasson announced the promotion of Sasha De Sola to the rank of Soloist. The Florida native, who has trained with the Kirov Academy and the Paris Opera Ballet School, has been impressing in SFB performances even while in the Corps de Ballet.