In a neat and meaningful parallel, SF Opera General Director Kurt Herbert Adler in 1957 named the Merola training program for his predecessor, Gaetano Merola, and 20 years later, Adler’s successor, Terence McEwen, paid tribute to him as he established the Adler Fellowship program for young talent ready to start professional careers, a next step for Merolini.

Both programs have survived the COVID pandemic to date, but not without consequences, and they need public support. Merola skipped 2020 and the Adlers, coached mostly online, merged the 2020 and 2021 seasons. An important omission last year was the annual “Future Is Now” concert, the Adlers catching up with it on Friday, in what should have been a capacity-occupied Herbst Theatre ... but wasn't.

As singing can project breath (and virus) up to 20 feet, the first six rows of Herbst were kept unoccupied, just in case, even while both performers and audience have been vaccine-checked, and the audience kept on masks at all times.

SF Opera Music Director Eun Sun Kim conducted the Opera Orchestra, and she also had a vital role in the program, having coached the Adlers through the pandemic online, regardless where her busy guest-conducting schedule took her. Her involvement was complete, even with the singers downstage, behind her back as she was leading the orchestra seated on the stage, she was accompanying the singers and still conducting them even without visual contact.

Through decades of this event, my experience at every one of them was similar in having one or two peak experiences, performances that swept the listener away and stayed in memory. For this concert, even among a handful of standouts, “the” moment came during a generous excerpt from Richard Strauss’s Ariadne auf Naxos.

The chamber orchestra, with concertmaster Kay Stern, did wonders with the score, as the scene reflected the interruption and difficult challenge to performers they just experienced in “real life.” For Strauss, with Hugo von Hofmannsthal’s libretto, the comedy-drama is about the crisis when the planned entertainment at “the home of the richest man in Vienna” is turned upside-down, pitting the serous-minded Composer (a trouser role) against Zerbinetta, the frivolous comedienne of the commedia dell’arte troupe, in a storm about the haughty Prima Donna.

Handling the difficult vocal requirements with ease and power, Simone McIntosh’s Composer and Elisa Sunshine’s Zerbinetta clashed and (almost) reconciled, projecting to the audience the unexpected mutual attraction the characters themselves are not aware of. Their duet provided “the” moment when everything else falls away.

The cast was uniformly outstanding, ready to go onstage next door, if the SF Opera centennial season happens to include Ariadne, for which Eun Sun Kim seems to have a special affinity. In voice and dramatic presence, Esther Tonea was the believable Prima Donna; as the Music Master, Stefan Egerstrom mastered a character who is asked to master the onstage storm; along with Zhengyi Bai as the Dancing Master and Christopher Colmenero as the Tenor (the scene ended before he would become Bacchus, faced with a virtually impossible vocal challenge.)

Elisa Sunshine also impressed in “Quando rapito in estasi” from Lucia di Lammermoor, with Simone McIntosh’s Elisa. Anne-Marie MacIntosh did justice to “No word from Tom” from Igor Stravinsky’s The Rake’s Progress and sparkled as Norina in a duet from Gaetano Donizetti’s Don Pasquale, with Timothy Murray.

Tonea’s other prima donna appearances came in an aria from Vincenzo Bellini’s Il Pirata, as Donna Anna with Chris Oglesby’s Don Ottavio in “Ah fuggi, crudele, fuggi,” from Mozart’s Don Giovanni, and as Elettra in a scene from Mozart’s Idomeneo, with McIntosh, MacIntosh (with an “a”), and Colmenero in the title role. Egerstrom was sensational as Daland in an aria from Wagner’s The Flying Dutchman.

The surprise of the evening was Zhengyi Bai’s vocally and dramatically over-the-top “Aria of the Worm” — not a misspelled role from Luisa Miller, but Bégearss from John Corigliano’s The Ghosts of Versailles. The villainous Patrick Honoré Bégearss extols the worm as the symbol of all evil, the alternate king of all beasts. The Herbst audience, first surprised and shocked, at the end celebrated Bai, rightly so.

In another sign of continuity, a week before the Adlers’ concert, SF Opera Center Artistic Director Carrie-Ann Matheson and General Manager Markus Beam announced 11 recipients of the 2022 Adler Fellowship.

Another change in the Adler Fellowship is the retirement of César Ulloa, acclaimed master teacher, who is also Chair of Voice Department at the SF Conservatory of Music:

“It was not an easy decision to make, but I think this is the right time for me to cut back a bit on my teaching and have a little more time to stop and smell the roses. I am still teaching at the Conservatory with a lighter load and of course I continue to teach all my private students that have been with me for a very long time and still work with me,” Ulloa told SF Classical Voice.

In the past 16 years with the Conservatory and the SF Opera Center, Ulloa added hundreds of students to the multitude of those he had coached around the country and abroad. The student of Thomas Hayward, Franco Corelli, and Boris Goldovsky himself, Ulloa has received accolades for his teaching.

Mezzo Frederica Von Stade said: “I think we all treasure the great gift that César Ulloa gives to the Conservatory and the Merola and Adler kids. There is an excellence and knowledge and devotion that are evident in all the work that he does. I’ve always been impressed by everyone I’ve heard that has worked with him and that’s quite an accomplishment. He is a real blessing to this musical community and I know how grateful all his students are to him.”

Marilyn Horne said: “César Ulloa has been such an important voice pedagogue for so many years, and doing it so successfully, he certainly deserves all praise and congratulations. I have admired the fruits of his labors constantly. He has passed on so many good singers from the SF Conservatory to the Music Academy of the West in Santa Barbara, and we have had the pleasure of his endeavors.

“I wish to convey to César my warmest congratulations and respect for all his years of devotion to the art of singing. He has been and continues to be a bright light in that most difficult arena, voice teaching. Thanks to César for making it possible for the world to have so many new singers who are succeeding so nicely.”

“It has been an immense pleasure for me to have been given the opportunity to teach and mentor so many incredible young artist in the Adler program during the past 16 years,” Ulloa said. “Thank you, SF Opera, for always supporting me and believing in me. You have been an inspiration in my life and I will forever remain grateful.” 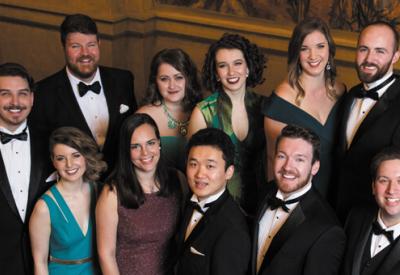 The Adlers: Live at the Drive-In

Looking Back and Ahead As SF Opera Prepares to Turn 100

The approaching centennial is cause for celebration and speculation as the pandemic continues to stymie even the best-laid plans.

The concert won’t be all memories: A premiere from composer Cava Menzies honors the outgoing chorus director.

The Future Is Now for San Francisco Operaʼs Adler Fellows

The young singers who have been through the Operaʼs training program are already shining in mainstage productions. With the spotlight focused on them, they showed great poise and maturity.