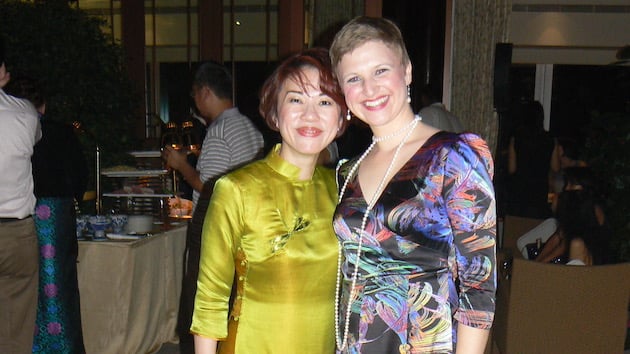 A long, fascinating, and difficult journey through three continents, with stops in San Francisco, is leading to the Nov. 30 publication of a unique book, Singing in Mandarin: A Guide to Chinese Lyric Diction and Vocal Repertoire, by Juliet Petrus and Katherine Chu

“It was just over two years ago that I was in San Francisco to perform with Haojiang Tian in a concert in Herbst Theater with other artists from the iSING International Young Artist Program,” writes Petrus from London.

“Since that time — and until March of this year — I have continued traveling back and forth to China and across Europe specializing in the performance of Chinese contemporary vocal music.”

Besides performing and teaching, Petrus and Chu — a 1995 Merola apprentice coach, with careers at the Met, the Saito Kinen Festival in Japan, Teatro Municipal de la Opera in Santiago, Chile, the Salzburg and Spoleto Festivals, and the Philharmonic of Taiwan — have been at work on the book that’s both practical and scholarly (there are hundreds of footnotes).

Singing in Mandarin combines a brief study of linguistics, notes about the history of China and Taiwan, the development and significance of Pinyin (spelling system using the Roman alphabet to express how Chinese characters are pronounced), a wealth of information about Mandarin pronunciation, and scores with multilingual text of Chinese songs.

It is the first book to introduce Mandarin as a language for singing, with a detailed explanation for the creation of sounds and a system for learning them. The second half of the book walks the reader through contemporary Chinese repertory and its relationship to the history of the region.

Both authors have long been active in the performance of Chinese music on several continents and prominently in China itself. Both came through Metropolitan Opera star Haojiang Tian’s iSING! program, appearing in the program’s shows in China, the U.S., and Europe.

China, which built 50 new opera houses in recent years, may be “the future of opera,” says Tian, “so it’s about time to reverse the trend. Instead of Chinese singers always coming to the West, Western singers are coming to learn Chinese.”

Chu has been program manager of iSING!, which enables young Western singers to explore the emerging opera scene in China by studying Mandarin and Chinese vocal music while continuing their Italian, French, and other opera training. 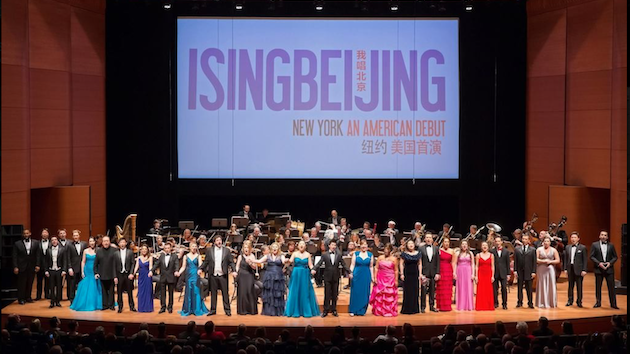 iSING! was Petrus’s first exposure to Chinese language, culture, and music. An opera singer by training and profession, she worked with Hao Jiang Tian, and received a Confucius Institute Scholarship in 2014 to attend Tongji University in Shanghai, where she began to specialize in contemporary Chinese vocal literature.

Her performances in China have taken her to more than 20 cities, and include concerts for CCTV, in the Great Hall of People in Tiananmen Square, the National Center for the Performing Arts in Beijing, with the Shanghai Symphony, and solo recitals across the Dongbei region.

“It was initially the rush of being onstage that drew me into Chinese music, language, and culture,” she says. “But as the years have passed, as my relationship with China, its music, language, and people has grown, it has become about how I can use my first language — music — to connect my first and second home. When words and circumstances create division, it is still my hope that song can span continents to connect hearts,” Petrus says of her experience.

In addition to being a teaching artist for Lyric Opera of Chicago for over seven seasons, Petrus was an associate professor of voice, piano and viola for the City Colleges of Chicago. Across China, she is a welcomed lecturer and masterclass teacher, having worked with students at conservatories in Harbin, Shenyang, Beijing, Nanjing, Jinan, and Chengdu, among others.

Besides the 2018 San Francisco concert, presented by Merola, iSING! has had an important presence in the city, welcoming numerous SF Conservatory and Merola alumni in China, and touring with them.

Singing in Mandarin sets the goal high. With it, says Petrus, “the classical singing world will have a guide to Chinese vocal music. I hope that this book will help begin the conversation of bringing Mandarin forward as a new ‘lyrical language,’ a language used in singing, much like Italian or German.

“Likewise, I hope that it will allow for the printed music, much of which is currently only available in China, to be made available in the West using the transliteration guidelines introduced in the book. This music may finally be made accessible for a worldwide audience.”

Martin Katz, the renowned pianist, accompanist, and vocal coach, greeted the book by saying he is “thrilled to see this comprehensive guide available; Juliet Petrus and Katherine Chu have opened the door for English-speaking singers, their pianists, and their coaches to finally feel comfortable in approaching repertoire in this wonderful language.

“They present all the essentials with the utmost clarity, and it includes recorded examples. This is an important contribution to exploring this fascinating trove of vocal music.”

Yes, I am a proud and happy Merolina, from the class of 1995. That summer was a turning point in my life and career and I carry the fondest memories as well as lessons learned from Merola that year!

Writing the book has taught me so much. It made me reexamine the way I speak my native tongue, and reacquaint with it through this unique perspective of a practitioner in the teaching and learning of diction.

It was illuminating and even entertaining to observe how Chinese people from the different diasporas make the various sounds of this language and how their speech habits reflect their lifestyle and mind-set.

An example: I was speaking to a person from Nanjing and another one from Tianjin. They were making these throaty sounds that I myself do not produce while we utter the same word. The mental association and emotional attitude in the word came across in the placement of that pronunciation. Without that, they could not even say the word. The Tianjiner’s pronunciation of everything is completely tied to the cultural stereotype and personality traits of the city.

The greatest and most unexpected gift from working on the book was the discovery of not only this fantastic repertoire, but to examine the history of modern China and the cultural phenomenon of Western classical music in China through the prism of vocal music.

I hope the book will open a world for everyone interested in singing and moved by the power of the sung word, just like it has done for me in working on this book. There is more to explore and to ask. I want to keep digging. But more than anything, I want people to sing and hear this music!”

A Chinese Classic in European Style