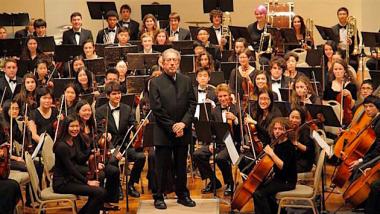 On first (and second) look, I was sure Satoko Stroud made a mistake in the note she sent to SFCV about the Young People’s Symphony Orchestra’s Feb. 29 concert, held in the First Church of Berkeley. 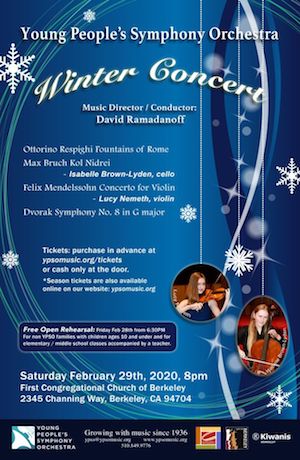 No, she insisted, that will be YPSO’s one and only winter concert, although ... aha! here comes the correction: For the Mendelssohn, she admitted, it’s only the first movement.

Still, one and a half concertos, a symphonic poem, and a symphony — all of it? Stroud, a singer with the Berkeley Community Chorus and Orchestra and marketing volunteer for YPSO, says that’s par for the course for the 83rd season of California’s oldest youth orchestra, also the first independent youth orchestra in the nation.

“Under Maestro David Ramadanoff,” Stroud wrote, “we have four concerts each year, and in 2020, a European tour to Leipzig, Vienna, and Prague to attend Beethoven’s 250 anniversary concerts. Last month, we participated in the Bay Area Youth Orchestra Festival in Davies Symphony Hall. Oh, and tickets are priced at $15 to $30.”

Now it’s coming back: it’s YPSO, with 92 musicians ranging in age from 11 to 20, and coming from 29 cities of the San Francisco Bay Area. The organization is funded in part by the Berkeley Civic Arts Grant, Kiwanis Club of Berkeley, Alameda County Arts Commission, individual and foundation donors, the friends and families of YPSO students.

Ramadanoff, who has led the orchestra for 31 years, speaks of his “concern about the enormous academic pressures increasing on our musicians at school, and to still have the time to practice and play at the high level that they do.

“At the same time, those that can make the commitment, they find it rewarding; so, it makes it doubly important that we continue to do it. And we’re doing this at a time when music, in some areas, is being cut back.”

Soloists are winners of the Concerto Competition: high-school senior Isabelle Brown-Lyden in Kol Nidrei, and YPSO concertmaster Lucy Nemeth, 17, a Crowden School alumna, in the Mendelssohn.

Nemeth, who started playing the violin at age 5, says she has been listening to the concerto all her life and “performing this piece with the YPSO feels surreal.” She regards it as technically difficult, “an interesting challenge to work on finding a way to accurately play this piece in an early romantic style. I’m incredibly excited about the upcoming concert.”

Catch these emerging artists in their last local concert before they fly off for out-of-town concerts, college, and careers.