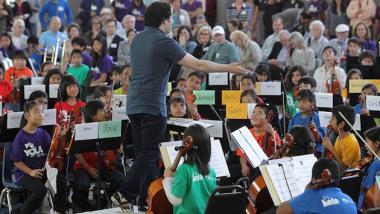 Youth Orchestra Los Angeles Is Having “Encuentros” in Mexico City

Youth Orchestra Los Angeles, the El Sistema-based orchestra that the LA Philharmonic instituted 13 years ago, now has more than 1,000 musicians in it, and 96 of them are going on tour together with the LA Phil itself. That group is accompanying the Phil on its tour of Mexico City, Nov. 10–15.

While the Phil plays its tour repertory, the YOLA players (actually from three different YOLA sites, which is necessary because of the geographic size of Los Angeles) will participate in “encounters,” or “encuentros,” as the Phil bills them, “a series of intensive music and leadership-focused workshops, rehearsals, and masterclasses led by LA Phil Associate Conductor Paolo Bortolameolli and LA Phil musicians.” The program culminates in a free, open rehearsal with Gustavo Dudamel on Nov. 13 at the Palacio de Bellas Artes and a free daytime performance for school children by YOLA on Nov. 14 at the Teatro Julio Castillo.

The touring schedule is part of the YOLA educational program, which from the beginning has stressed internationalism. Students have been to Boston, Tokyo/Fukushima, Seoul, Edinburgh, and even the rest of California. As one of Los Angeles’s sister cities, which the LA Phil has already celebrated in a festival a few years ago, Mexico City may not seem like a far reach, but the opportunity to break routine and discover the rich musical heritage of that city will make the student musicians that much more savvy about the musical trends that already impact their world. “Encuentros” is a collaboration between YOLA, Sistema Nacional de Fomento Musical en México, Music Schools of INBAL, and the Gustavo Dudamel Foundation.

The beloved conductor supports young musicians in an initiative modeled on the program that fostered his own musical development.

Mixed Results From Dudamel’s Pairing of Bruckner and Andrew Norman

The LA Phil offers a glimpse of their upcoming tour.

Standing ovations and rave reviews honor one of the Bay Area’s best exports.