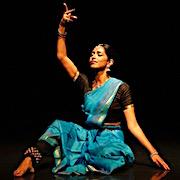 Split with a hammer or sharp blade the exterior of a tiny seed, the earliest origins of life are on view. A microscope allows deeper inspection of individual membranes and cells. Even so, there is mystery in the plant that grows when a seed is pushed into soil. There is magic in the flowers, fruits, and other offspring produced. Given soil, water, and sunlight, even a broken seed grows.

Which is a loose allegory to the process undertaken by the primary collaborators in the multimedia project, Broken Seeds (Still Grow). The production Nov. 16–19 at The Flight Deck in Oakland brings together the collective talents and life experiences of Nava Dance Theatre Artistic Director and choreographer Nadhi Thekkek, Oakland-based visual artist Rupy C. Tut, and composer and flutist G.S. Rajan.

Drawing thematic inspiration from the 1947 Partition of British India that divided with unspeakable violence India and Pakistan — and urgency from current anti-immigrant, anti-Muslim sentiment in the United States — the 70-minute production joins the expressive gestures and rigorous, rhythmic footwork of the classical South Indian dance form bharatanatyam, the exquisitely detailed brushwork and subtle coloration of calligraphy and Indian miniature painting, and an original score that incorporates traditional Indian raga-based music. The music is played by flute, mridangam (a double-sided drum), and ghatam (a clay pot, used as percussion), along with vocalizations (a recitation of dance terminology), and Western music influences represented by the cello. With the dance and music performed live, the visual art is invested with dynamic range. The images are transposed to videos and projections that bathe the dancers, backdrop, and floor with evolving trajectories of art-in-motion and gasp-inducing photographic stills taken from historical archives.

“We first researched eyewitness accounts of Partition from the 1947 Partition Archive in Berkeley,” says Thekkek, about the process she and Tut used to learn about the over one million casualties and 15 million refugees caused by the Partition. “This is the first half of the piece. The second half is a continuation of the personal inquiry Rupy and I have had. What struck me is the violence of the things that happened and yet it seemed like Partition crept up on the people.”

Gory images of streets strewn with blood and bodies, pictures of overcrowded trains with refugees’ hands, legs and sometimes heads protruding from windows, and news reports that made it evident that the average Indian citizen did not anticipate Partition made the historic events surprisingly relevant to Thekkek. “Our friends here in the Bay Area say anti-South Asian hatred will pass, it’s not such a big deal that there’s discrimination against Muslims. There are hate notes on our cars, our houses egged. There is a general sense of fear, but we’ve accepted it as a part of our experience here. As a citizen, I want to address that hate and prejudice. It may not be a passing thing: It can escalate.”

With story elements interpreted for the body or interpolated into visual art, Thekkek and Tut developed a storyboard outlining the narrative. In the choreography, a section meant to convey mob mentality establishes repeated rhythmic footwork, with dancers reaching to pull other dancers into one group. “The perpetrators in mobs didn’t know what or who they were fighting against or who the enemy was, so I don’t use one dancer versus the others all the time. We kick it around with a constant four-person formation. Only at the end do they come together in unison because by then, the mob is most powerful,” she says.

Thekkek reviewed the story board with flutist Rajan and asked for certain qualities, like “childhood, playful, a time before you know danger,” or “note-based, lyrical, not so-too sad, but hopeless with a tinge of hope that something could change.” The latter section, she says, when expressed in words seems antithetical but in musical form is tonal perfection.

Rajan says in a separate interview that in working with a choreographer, he thinks in mathematical equations. “When I do compositions for singing, it’s mainly melody and techniques used for singing. But for dance, there are 3-, 7-, 9-beat (patterns) that have to go through the melody. Those are in the footwork, so there are calculations to make the patterns go with the melody.”

The cello, Rajan says was selected deliberately, even with mild trepidation. “I don’t use the word fusion for my music, because it becomes confusion. I use ‘innovative’ or ‘experimental’ music. Fusion, if you are not one hundred percent authentic on different styles — I better not do that. I am a fan of [Western] classical music, of Bach, Beethoven, Mozart, but I have no authority in cello. If I’m to use it, I better do something innovative.  I must use the best of classical Western-style music and then bring that within my system.”

Seeking to capture the styles and idioms relevant to Indian music during Partition and also the intrusion of the British, Rajan combined an appealing well-known raga with a cross-pattern conversation between flute and cello. In other sections relating to war, he turned to percussion and says the two drums add tension to syllables drawn from bharatanatyam “verses,” although lyrics are used minimally in the work.

Interwoven in the mix are Tut’s 8-by-12- or 4-by-6-inch paintings. As originals, they are meant to be viewed intimately, in small galleries, museums, or private homes. “The interaction is not meant to be a large arena,” says Tut. “Even in museums, you need magnifying glasses.”

But too often, the viewing of miniature paintings is cursory; the work is swiftly labeled “beautiful” or complimented only for its small size. While the challenge is exciting to Tut, enlarging the works through projection is nerve-wracking. “Each brushstroke must be the same thickness, the same color,” she says. “People will see in the videos the process, which traditionally has been a secret. I’m exposing myself by laying it out there, showing the steps taken.”

The larger format makes obvious the parallels to the dancers, whose all-important, storytelling hands might curl like the demons in Tut’s paintings. Demonic representations in Indian art carry grace in their bodies, much as the dancers convey their control and strength with upright, dignified postures. “Demons aren’t always gross-looking,” says Tut.

Because she has been pregnant while working on the project, Tut says the legacy of Partition and the story of South Asian Americans today is particularly significant. “I think not just how this production impacts the next generation, but how it will impact my childrens’ children and their children. It’s a constant struggle that I care about the language, our history, and these traditional art forms — but I want to bring forward contemporary issues. For traditional art forms, there must be a way to make them continue and thrive in the future.”

Perhaps multimedia performance is the best, or at least an effective way to convey complex, timeless concepts that include identity, separation, home, family, hate, fear, brokenness, healing, and hope. Human power and fragility are held in fingertips, arms, legs, and spines. Emotions project from faces, fine brushwork, furious tempos, a cello’s timbre, a flute’s haunting notes. Life’s ongoing, tradition-rich rhythms echo in stamping feet, drums, or in empty and full spaces that greet the eye. “Classical means timeless,” says Thekkek. “I don’t have to change the movement vocabulary: what I choose to show or emphasize is contemporary. Our movement is bharatanatyam. It is the subject, the story, that is contemporary.” Broken Seeds, the collaborators suggest, is created to spread awareness, provide immediate solace, and nurture future tolerance.

Correction: In the article as originally published, the caption below the photo of Rupy C. Tut misspelled her first name. We regret the error.