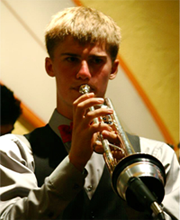 “Kids are physical. Their shoulders and other joints don’t creak and hurt as much as ours do,” says Cabrera, who’ll be conducting both his own San Francisco Symphony Youth Orchestra (SFSYO), in two movements from Prokofiev’s Symphony No. 5, and an all-star finale, performing Prokofiev’s “Death of Tybalt,” from Romeo and Juliet.

The young musicians “do things with their bodies that we are jealous of, and can remember when we could do it,” Cabrera continues. “And you can see that on the stage, this palpable excitement which is just coming out of every pore.”

Getting to perform at Davies will be especially exciting for the kids coming to this year’s Festival from other ensembles: the California Youth Symphony, El Camino Youth Symphony, Marin Symphony Youth Orchestra, Oakland Youth Orchestra, and the Young People’s Symphony Orchestra. “I’ve been with my parents to see concerts of the San Francisco Symphony there, and now they’ll be seeing their kid playing on that stage,” proclaims 16-year-old trumpeter and Corte Madera resident Alex Ehrenberg. “This is the first year that our Marin orchestra has been invited [to the Festival], and we’re all really excited.” Participating ensembles were chosen by consensus.

“There will be a lot of people who will say, ‘Wow, these kids are playing music at an incredibly high level, and I didn’t know that was still happening.’” — Donato Cabrera

During his holiday break from Redwood High School, Ehrenberg daily practiced his part in the fourth movement from Dvořák’s Symphony No. 9, the Marin ensemble’s contribution to the Festival program. “This is a rare opportunity, to play at Davies, and I want to come out of it with good feelings about it,” he explains, “so I’m definitely working on it.”

The Festival began in 2009 as what Cabrera calls “a grassroots effort among Bay Area youth orchestras,” who were charged a nominal fee for use of the Davies venue. Proceeds from the Festival concert benefit homeless youth organizations around the Bay. For the first time this year, the San Francisco Symphony has become a sponsor of the event, scheduling the Festival as part of its centenary season, with a commitment to continue to host it every other year. The all-star finale, formerly involving more or less equal representation from all ensembles, has been reconfigured as a supersized orchestra, with selected players from the visiting ensembles bolstering the nucleus of the “home team” SFSYO, under Cabrera’s baton. One of those players will be 16-year-old cellist and pianist Corrina Chang, who attends Granada High School in Livermore and will be returning to the Festival with the Oakland Youth Orchestra (OYO).

“It was kind of awkward at first,” says Chang about her performance with last year’s all-stars, “because I was playing next to someone I didn’t know at all. But I think it also helped me feel how powerful everyone can be, with this common bond of music — how people coming together can prepare a great piece of music in one day.”

Seventeen-year-old Brooks Fisher, a Mill Valley resident and Redwood High senior, will be enjoying his second and last Festival, before he takes off for conservatory education. He points out that both of the Prokofiev pieces are already familiar to the SFSYO, with which he plays oboe. As with the other ensembles, the SFSYO will be showcasing material from its current season. But “the Prokofiev Five is real difficult, with some really fast passages I had to work on a lot, with the metronome,” Fisher admits.

Aside from the individual segments of the program, the sense of a treasure shared by over 500 kids in one spectacular venue is a keynote of the Festival. “It’s really geared toward meeting other musicians,” says Alex Ehrenberg. “We have a lot of down time when we’re not playing, behind the stage, so we get to meet all different kinds of people,” notes Brooks Fisher. “And I found a few of them later last year, on Facebook.” Corinna Chang has found her OYO to be a bit more gregarious than some of the other ensembles, but hopes that this year “we can build on our bonds, so it’s more like we’re giving this concert together as friends.” “I don’t think kids are really wanting to view it as a battle of the bands,” agrees Ehrenberg.

As for the audience, no doubt packed with parents and friends, "there will be a lot of people who will say, wow, these kids are playing music at an incredibly high level, and I didn’t know that was still happening," assures Maestro Cabrera. "Yes, it’s a celebration of what kids are doing and what they can do. Given the proper support from community and parents, this is how it can continue into the future."